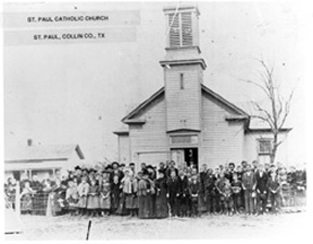 St. Paul Catholic Church and cemetery is located in the St. Paul Community in southeast Collin County just east of the intersection of Farm Road 2514 and St. Paul Road. St. Paul was the first catholic church to be formed in either Collin or Dallas Counties and predates by thirty-four years the establishment of the Dallas Diocese. The church is a landmark for the Catholic Church and for Collin County, Texas.

According to Sister Lois Bannon (deceased) at the Dallas Catholic Archives, the church was established as a mission in 1847 by local Irish farmers in the community.  It was operated as a mission by the Diocese of Galveston, whose jurisdiction composed all of the State of Texas east of the Colorado River. In the beginning there was no building. The parishioners in the St. Paul community met in each others homes. It was in one of these homes where the idea was formed to build a church!

According to Sister Lois’s archival files, the acquisition of the land is recorded as follows: Aunt Ella Burns was washing clothes in the creek with another lady companion when they were frightened by a stranger approaching them on horseback. The gentleman introduced himself as James Gallagher. He told Aunt Ella he was searching for Andrew H. and Lucinda Burns. Gallagher said his mission was to ask them whether a parcel of their land could be purchased by the Galveston Catholic Diocese for the purpose of building a church for the small community. Mr. Gallagher appeared to be a gentleman who meant no harm. Aunt Ella recognized his name and evaluated the circumstances. After she told Gallagher where to locate Mr. and Mrs. Burns, Gallagher approached them and presented his proposal. They quickly agreed to sell a parcel of land to the church.

The legal transaction occurred in the fall of 1869. Andy and Lucinda Burns, both Baptists, sold the land for $1 to Bishop C. M. Dubius (Dubuis) of Galveston for the use of  a catholic church. At that same time, on 27 November 1869, Emily Galleghar sold to Bishop M. Dubius of the Galveston Catholic Diocese two acres on the waters of East Fork in St. Paul for a cemetery for the price of $10.

According to the Collin County Census of 1880, Father Martiniere resided with the James Kirkland (Kneeland) family on their farm outside Wylie.  Please note the various spellings of these French Priest's names. I have not corrected their spelling of names.

The Diocese records document the church’s destruction by a cyclone in 1871. It was rebuilt by church patrons with lumber hauled from Jefferson in wagons of local businessmen John Burns and Tom Brown. The patrons of the rebuilding are listed in the archives files as being fine people of Wylie. The original lumber bills, paint bills, etc., are all kept in the files of the Diocese Archives Library in Dallas, Texas.

The church was destroyed for a third time by fire. Rather than rebuild the church one more time, the parishioners decided to build the church closer to Wylie. This new church, St. Anthony Catholic Church, built in 1916, is still in operation and is located at 404 North Ballard.

About the author:
Brenda Kellow, a Certified Genealogist and a Certified Genealogical Instructor, grew up in Plano, in Collin County, Texas. She is the great-great granddaughter of Charles C. Stibbens, the only soldier of the Battle of San Jacinto to be buried in Collin County. He and his wife, Elizabeth Creekman, are buried in St. Paul Catholic Cemetery. A Texas Historical Marker stands by their graves. Brenda is the author of the award winning book copyright in 1992, Charles C. Stibbens: Soldier of the Battle of San Jacinto, Citizen of the Republic of Texas.