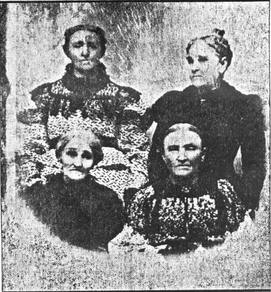 The one standing left with front view is Mrs. John. The one to her left, with side view, is Mrs. Silas Harrington, the one seated left in front of Mrs. Beverly, is Mrs. B. F. Matthews, the other one seated to her left is Mrs.Robert H. Brown.