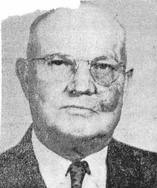 JAMES DOWDY
Newspaper, 1986.
Funeral services for James Russell Dowdy, 91, of McKinney, who died Sunday at HCA Wysong Medical Center, will be held at 10:30 a.m. Tuesday in the Horn-Harris-Crouch Chapel with the Revs. Earl Rodgers and Keith Francis officiating. Interment will be in Wilson Chapel Cemetery with Horn-Harris-Crouch Funeral Home in charge of the services.
Dowdy was born Aug. 10, 1895 in Franklin community, the son of John and Lucie Foster Dowdy, and married Laura Mae Hughes.
After graduating from McKinney High School he worked for the railroad. He was in World War I serving in the Army. He returned to McKinney where he founded Dowdy Produce Co. in February of 1928. He was involved in cattle and land development when he retired in 1970.
He was a member of Wesley United Methodist Church.
Survivors include his sister, Lela Dowdy Wilson of Dallas; sister-in-law, Marie Dowdy of McKinney; nieces and husbands: Anita Nichols and Weldon Miller of Dallas, Ann Dowdy and John Dawson of Va., Eugenia Dowdy and Charles Graves Jr. of McKinney; nephews and wives: William Dowdy and Ann of Dallas, Dr. James Dowdy and Betty of Germany, Harold Dowdy and Aliene of Calif., Paul Dowdy and Sue of McKinney, Bill Rittenhouse and Elsie of McKinney; niece great-nieces and 15 great-nephews.
Pallbearers will be: Paul Dowdy, Loyd and Keith Swaim, John and Bob Pressnell. Honorary pallbearers will be: Dr. Gary Gibson, Mark Rittenhouse, Benny Bridgefarmer and Earl Justice.
He was preceded in death by his wife, Laura Mae Hughes Dowdy in 1980.