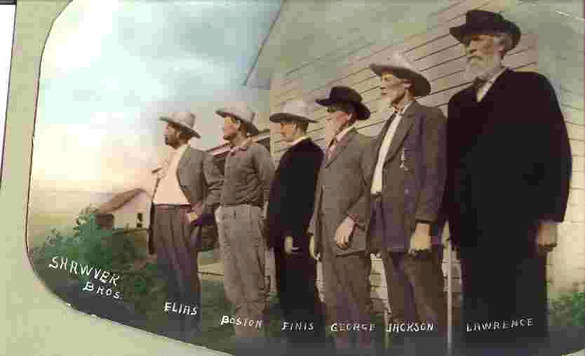 This Picture is of the Shawver Brothers.  All were born in Collin County from 1850 to 1871.  Lawrence was the first born.  Their parents were Granison/Grandison Boston Shawver and Elizabeth McFarland.  Granison often went by G Shawver.  They are listed on the Collin County census from 1850 to 1880.  They are also found on the Parker County census as Granison was building the home they moved that same year near Gibtown, Jack County.  While living in Collin County Granison/Grandison was a freight hauler and farmer.  They actually raised ten children while in Collin County though no pictures of Granison & Elizabeth or two of the daughters seem to have survived. As you can see this picture was taken years later (shortly before Lawrence’ death) . This family played a considerable part to the farming and commerce of that community in the very early years.

Granison was born in Virginia in 1822.  His Father Boston Sebastian Shawver migrated to Missouri in 1837-39 where Grandison married Elizabeth McFarland on Jan 10, 1850 in Pettus Co., Missouri.  That same year they joined the great migration to Texas.
Submitted by Carol Vincell