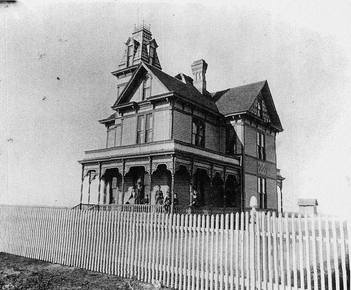 This two-story Victorian style home was built in 1890. Olney Davis was a prominent businessman, civic leader, and Mayor of Plano. In 1899 he became the first president of the Board of Trustees for the Plano School System. The elaborate front porch columns were added in a later addition. The building was converted to office use in the mid-1980s. The tower or cupola has been removed.

Biography
The Olney Davis home, known locally as the House on the Hill, stands proud and tall, looking down upon the thousands of acres of new brick homes that make up Plano today. This lovely old home that has been occupied for 92 years by the Davis family points up a way of life that has given way to progress, recalling to passersby a time of gracious living, a perfect setting for the lovely wedding long ago when a daughter descended the stairway to become bride of a grandson of Sam Houston.

Its gingerbread trim and cupola is in sharp contrast to the modern architecture of the newer part of town.

DAVIS HOME KNOWN AS THE HOUSE ON THE HILL

The Olney Davis home at 901 18th Street is one of the first of houses of the ‘90 period when builders favored frills along with comfort. It was built in 1890.

Miss Maud Davis, who lives in the family home, says it had had a high cupola, much gingerbread trimming, an encircling veranda and a white picket fence. It was the first residence built in northwest Plano and was known as “The House on the Hill,” being located on the highest point in town.

Mrs. Edna Davis Houston who also lives in the Davis family home says a Mr. Florence was its builder and that her father saw to it that the house’s foundations were deep and strong. Not a single door of the house has ever sagged or stuck.
Miss Maud says her father remodeled their home twice ad made additions through the years for conveniences. One remodeling took the cupola away and replaced the narrow veranda with present wide porches and stately columns.
Mrs. Houston regrets some of the changes made, particularly that the three marble mantle pieces were replaced with oak. The stairway is the original one, but it has been moved farther back into the hall. Mrs. Houston came down the stairs as a bride when she married Harry Houston, who was a grandson of Sam Houston. The couple lived in Dallas, but after his death, Mrs. Houston returned to Plano.

The Davis sisters relate that their father came from Waxahachie, Texas, in 1880 and located a few miles west of Plano to begin farming. He married Susan Effie Mathews, daughter of Benjamin Franklin Mathews, of the Bethany community. They came to Plano to build their permanent home and their children who grew to adulthood are a son, Robt. A., now deceased, and five daughters, Mrs. Edna Houston, Miss Maud Davis and Mmes. Pauline Thompson, Vera Harris and Helen Beckham.
The personages of Mr. and Mrs. Davis still pervade the Davis home as do their contributions to the community of Plano. For more than forty years Mr. Davis devoted himself to the commercial, civic, educational and agricultural development of Plano and region.

The gray house at 18th Street and H Avenue stands or something that gives one a feeling of pride.