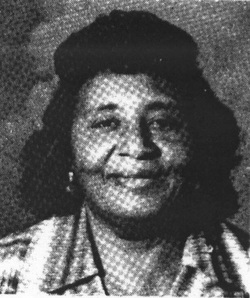 Bertha , a McKinney Independent School District teacher, since 1975, died last week, but her memory continues to live on through all who knew her.

She always said it was her grandmother who influenced her into the teaching field. And although it took her nearly three decades to accomplish her grandmother’s wish, she did it.

After rearing her family, she received her bachelor of science degree in business education from Bishop College in Marshall on May 25, 1965. She then attended Prairie View A&M from 1966- 1967 and went on to do graduate work at East Texas State University from 1972-73.

Mrs. Bailey began working for MISD on Aug. 14, 1975, as a typing teacher and continued working there until this month.

During her career, she was responsible for creating a PTA at Doty High School, she served as president of the North Texas District Congress of Colored Parents and Teachers and was a member of the Texas State Teachers Association.

"We worked across the hall from each other for seven years," Liggett said. "She had a smile every morning and always something good to say to encourage me.

"She loved to brag on her students and was concerned about all people," Liggett continued. "Whenever I would get discouraged she would always say, ‘It’s going to be all right.’"

Liggett also said Mrs. Bailey was strict on her students, but only because she cared about them.

"She was one great Christian lady and was one of my dearest friends," Liggett said. "She can never be replaced."

Jesse McGowen Jr., a counselor at the high school, worked with Mrs. Bailey for 10 years, but also knew her while growing up as a young child.

"She was like a second mother to me when I was younger," McGowen said. "She was a very loving, determined person, and would have been a success in anything she did."

Mrs. Bailey once said her daily creed was to find the good side of situations, be as happy as possible and let God have a place in her life daily.