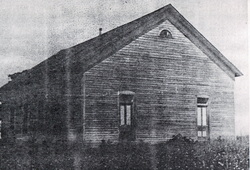 FOUNDED IN 1846 CHRISTIAN CHURCH AT VAN ALSTYNE ANTEDATES OWN COMMUNITY; NOW HAS 600 MEMBERS

In 1846 Texas had just been admitted to the Union. Van Alstyne had not been established. They country was sparsely settled and much of it was virgin forest or untilled plain.

But that was the year the First Christian Church of Van Alstyne was organized. It is one of the oldest Christian Churches in Texas. its establishment was on of the early organized efforts to bring the religion of Jesus Christ into a country practically a wilderness.

Collin McKinney, paternal forbear of many of Van Alstyne’s citizens and after whom both McKinney and Collin County were named, a man of power and influence in the early days of Texas, was one of the organizers and charter members of the church.

Like a link between the day of the church in swaddling clothes and the church in the fullness of its growth there stands one man — Elder R. C. Horn, veteran McKinney Christian minister, who died early in 1936 after serving as a minister sixty-eight years. His death at 93 was untimely as the local church had planned a display at the Texas Centennial in 1936.

To write a complete history of the church would be no little task but many facts are worth preserving. In 1846 J. B. Wilmeth began to preach at private homes in the neighborhood of what is now Van Alstyne and on the second Sunday in September, 1846, the first church was organized at the home of Carroll McKinney with the following charter members: J. B. Wilmeth and William C. McKinney,, elders; Nancy Wilmeth, Margaret McKinney, Sarah McKinney, Ashley McKinney, D. L. McKinney, Collin McKinney, Polly McKinney, Eliza S. Milam, Marcus S. McKinney, Bettie L. McKinney and these Negroes: Niah, Polina, Anderson, Lucinda and Hannah. These nineteen constituted the Liberty Christian Church in the beginning. They continued to meet from house to house for preaching and worship.

Dr. Asbury Cartwright came to this vicinity in April 1847, and gave his influence to the little church. In March 1850, the place of meeting was moved to Liberty Church and continued its work with various results. The body was reorganized by appointing William G. McKinney, Asbury Cartwright and G. w. Vernon as elders and Collin S. McKinney, G. Z. McKinney and Solomon DeSpain as deacons. At this time the membership numbered sixty-nine. Wilmeth and Cartwright were the principal preachers, aided occasionally by a traveling evangelist.

In 1854 the first house of worship was erected at Mantua. Soon Dr B. F. Hall joined the force of preaching to the new and growing church. During the Civil War the women and the few men left behind continued to hold meetings each Sunday. After the war the congregation rallied its forces and began to rebuild. By 1871 the old house became too small and it was decided to build a larger building.

Worship continued and new preachers came to the aid of the veterans including Elder Horn, Joe Darnell, J. R. Wilmeth, C. M. Wilmeth and Alf F. Douglas. Elder Horn was pastor in 1887 when it was decided the church should be built in Van Alstyne. The building was completed in December, 1888, at a cost of $4,400.

The present edifice was begun in 1914 and the final indebtedness was paid in 1919 at which time a dedicatory service was held, the sermon being preached by the Rev. E. H. Holmes.

The church today stands on a sound financial basis. Recently an organ was installed. Mrs. T. S. Cartwright has served as pianist and organist twenty-five years. The membership is almost 600.