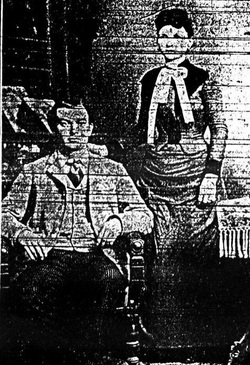 S. L. , carrier on route 2 out of Anna, Texas, received the appointment Sept. 1, 1903, and has been continually in the service since that date.

He has had many and varied experiences, during her service, has been in some fearful wind and electric storms, crossed Pilot creek one time when it was out of banks, the water passing over the floor of the mail wagon, and many other unpleasant experiences. But along with the hardships and dark days were many pleasant and sunshiny ones, and numbers among his very best friends some made in the service. He has used during this time ten head of horses, three buggies, two road carts, two mail wagons, two saddles and one automobile, besides a number of hired rigs....

He attributes whatever of success he has attained in the service to a conscientious performance of duty, and where in doubt, advising with the postmaster, reporting every irregularity, and has never received an adverse ruling from the postoffice department during his nine years of service. S. L. Bradshaw holds the position of editor of the Rural Route Carriers’ column in this paper. He is a writer of distinct ability and wide range of thought. His column in these papers is proving to be not only entertaining to his brother carriers and public in general, but his matter published is also helpful and instructive to all parties concerned and cannot fail to result in an improvement of the rural free mail delivery service of Collin county. The writer has enjoyed the acquaintanceship of S. L. Bradshaw for many years. We have ever found him to e a well informed, public-spirited citizen and always pulling for advancement along all lines for his fellow man. Uncle Sam made no mistake when he conferred an important responsibility upon him. S. L. Bradshaw has the solid backing of brains, courage, integrity, grit industry and perseverance. He is bound to acquit himself with credit and as it necessarily follows thereby also reflecting credit upon the postal arm of our federal government which he is so efficiently serving.