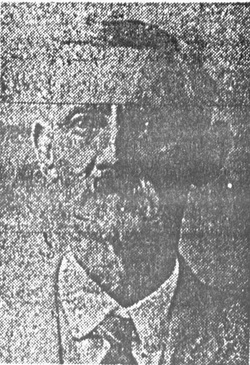 Uncle Joe Billingsley, gallant old Confederate soldier and veteran Democrat of Wylie, mingled with comrades at the dinner served by the Daughter's of the Confederacy on the first day of the picnic at the home of Gen. E. W. Kirkpatrick. Uncle Joe was born March 11, 1848, at Aukaugaville, Aukauga county, Alabama. He had a brother born March 11, 1846, and a sister born March 11, 1850. His father, Col. C. T. Billingsley, was born November 11, 1797, in Virginia. His father was a bugler in the War of 1812, being fifteen years old, and fought in several Indian wars. Uncle Joe Billingsley's brother, Major J. C. Billingsley, was major of the 7th Alabama Cavalry in Gen. N. B. Forrest's army. Uncle Joe himself was a member of Company A, 8th Alabama Cavalry, J. A. Clanton's Brigade, under Gen. Joe Wheeler. He came to Texas in 1867, spending the first year in the state of Gilmer, Texas. He then settled at Sachse in South Collin, where he lived for many years. He served as Postmaster under Cleveland and merchandised at Sachse. He later moved to Wylie where he served four years as postmaster under President Wilson and resigned his position as postmaster on account of ill health. He has served as deputy sheriff of this county in an early day and has always been prominent in the councils of the Democratic party, several times serving as delegate to the State Convention. Uncle Joe is a chivalrous old Southern gentleman, whose friendship these editors are glad to possess. We received a welcome visit from him while in the city Wednesday.