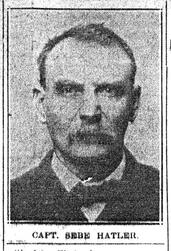 SEBRON D. HATLER
Biography.
Sebron D. Hatler (Sebe) was a native of Kentucky, born February 15, 1836. He was reared on a farm, and although he received on 9 months schooling he became one of the wealthiest men in North Texas. His father, Michael Hatler, was of Irish descent and married Lavinia Brackins whose father, Henry Brackins, was a soldier in the Revolutionary War. Sebron was the fourth of five children and at age 2 his father died.
In 1856 he went to St. Louis, Missouri and worked on a railroad that was being built, then in 1857 he came to Texas. When he arrived in Collin County he had only five gold pieces, but he had an abundance of energy and ambition. He bought a team and went to work breaking the prairie and hauling from Jefferson.
In 1860 he joined the Texas Rangers and after a year of service, he joined the Company K, 6th Texas Cavalry, served in Missouri and the Indian Territory, and later in Mississippi. At Corinth, he became ill and received a discharge, returning to farm his land. In 1862 he married Segeous Polk Lewis. In that same year in December he joined Captain Johnson’s Spy Company and the following January he was captured but managed to escape before they reached Camp Chase where he would have been held. He rejoined his company and served the rest of the war with them.
On his return home he was penniless but his wife’s father, an extensive land owner, was killed in a railroad accident while serving in the militia. Mrs. Hatler inherited 2000 acres of land and 1000 head of stock. With this start and careful management he increased the value of his holdings year by year. The large two-story house still stands set back from the roads east of Melissa.
Mrs. Hatler’s father, Lindsey L. Lewis, was from a pioneer Missouri family. He came to Texas in 1845 and was a large landowner.