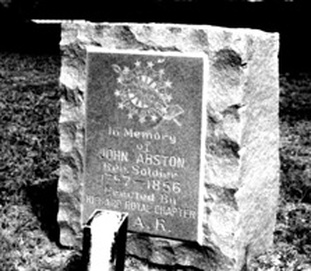 IN MEMORY OF JOHN ABSTON

[...]The land which included the cemetery tract was purchased by John Abston and his daughter-in-law, Sarah, widow of his son, Jesse, on January 19, 1854 from Samuel and Susannah Rainer. There are thirty seven marked graves in the cemetery.

John Abston, who died in 1856, was the first person buried in the cemetery. He was born on January 2, 1761 in Pittsylvania County, Virginia, the son of Joshua and Rachel Clement Abston. In 1779, at the age of eighteen, he volunteered for service in the Revolutionary Army and served for two years under captain John Ellis. On July 26, 1789 he married Frances Thurman in Chatham, Virginia. Two sons, Jesse and Stephen, were born to the Abstons. In the 1830s, after the death of his wife, John Abston sold his holdings in Virginia, and with his son Jesse, Jesse’s wife, Sarah, and little daughter, and his son, Stephen, moved to Jackson County, Missouri. In 1846 he divided his fourteen slaves between his two sons. Then, in 1853, with his son Jesse, and Jesse’s family, he moved to Texas. When they reached the town of Melissa in Collin County Jesse contracted pneumonia, died, and was buried there. [Note-Melissa did not exist in 1853. He probably means Highland] Subsequently, he moved on farther south in Collin County with his daughter-in-law Sarah, and her children and purchased the land that included the cemetery.

In the eighteenth report of the National Society of the Daughters of the American Revolution, published in 1914, there is the following story about John Abston:

Abston, John. Born Jan. 2, 1761; died 1856. Son of Joshua Abston, Captain of Virginia militia; served two years in war of the American Revolution. Enlisted from Pittsylvania County, Virginia; was in Capt. John Ellis Company under Col. Washington. The evening before the battle of King’s Mountain, Col. Washington, who was in command of the starving Americans at this point, sent soldiers out to forage for food. At a late hour a steer was driven into camp, milled, and made into a stew. The almost famished soldiers ate the stew without bread and slept the sleep of the just. The next morning they made the gallant charge that won the Battle of King’s Mountain, one of the decisive battles of the American Revolution. After the battle Col. Washington went to the place where the steer had been slain, and finding one of the horns, gave it to John Abston, a personal friend, saying “This is the horn of the steer that won the battle of King’s Mountain.” Abston took the horn and carried it as a powder horn until the war was over. In later years it was used to call slaves from their work in the fields. The horn is now as hard as flint, the color of gold, and has a polish equal to gold. A grandson owns the rifle and horn and treasures them very highly.

John Abston was born January 2, 1761 in Pittsylvania County, Virginia. He was the son of Captain Joshua Abston and his wife, Rachel Clement. Captain Abston served as an Ensign in the Pittsylvania County Militia 1770-1775. when the colonies severed relations with England early in 1775, the Committee of Safety met in Richmond, Virginia on September 27, 1775 to organize for their defense. Joshua Abston was appointed as a Captain in the Colony of Virginia Militia which position he held until 1781.

Early in the Revolutionary War, the British blockaded our seaports to cut off supplies. Among the items that could no longer be imported was salt-petre, a necessary ingredient of gunpowder. John Abston’s maternal grandfather, Benjamin Clement, remembered that a mixture of salt and salt-petre had long been used at hog killing time to cure hams and shoulders as they hung from the rafters in the meat houses. Although he was seventy-five years old, the old gentleman dug up the floor of his meat house, boiled the soil, strained the liquid through straw and thus was able to reclaim much needed salt-petre. It is said that he was the first person in the colony to do so with help of a young neighbor. They were able to make fifty pounds of gunpowder each day in the little mill at his home, “Clement Hill”. In this way, patriot Benjamin Clement was able to keep those long American rifles firing.

John Abston volunteered for Revolutionary War service in 1779, when he was only eighteen years old as did so many other young, patriotic Virginians. He was in the Battle of King’s Mountain.

John Abston married Frances Thurman on July 25, 1789 at Chatham, Virginia. They became the parents of two sons, Jesse and Stephen. After the war, they lived in Kentucky for a few years, then in the mid-1930s John moved his entire family to a farm near Independence, Jackson County, Missouri.

At sometime in the early 1850’s John Abston and his son , Jesse, converted their bank notes into gold bars, put them safely in a small trunk carried on a wagon pulled by oxen. Thus, John Abston began his trip, a journey to the great State of Texas.

When the family reached the Red River, they found a very turbulent river on the rise following recent heavy rains. With great difficulty, they were able to cross the river and saved all of their possessions, including the gold bars and their faithful slaves.

Soon, Jesse became ill with a fever and died. He was given a Christian burial in an unmarked grave near Melissa, Texas. The family subsequently settled on farmland in Collin County near the Lavon community.

John Abston first applied for his Revolutionary War pension July 7. 1855 when he was ninety-eight years old and nearly blind. The affidavit did not comply with the regulations which necessitated his filing a more formal affidavit in February 1857 as follows:

On this Fourth day of February AD 1857 personally appeared before me George H. Pegues, Chief Justice and Judge of the County Court of the County and State aforesaid (in vacation) John Abston a resident of the County of Collin and state aforesaid, aged ninety-six years who being duly sworn according to law doth on his oath make the following declaration in order to obtain the benefit of the Act of Congress passed June 7th 1832.

That he entered the service of the United states under the following named officers and served as herein stated: To wit, that he volunteered in the “Army of the United States” in latter part of the winter season in the year AD 1779 at Jasper Mountain, Pittsylvania County, Virginia under Capt. John Ellis whom he served but a few weeks.

The Company then went with Capt. Ellis, and this affiant was transferred to and went under command of Capt. Rose at the Town of London in Bedford County where they formed the main Army. He states that he served under Capt. Ellis and Capt. Rose and some other Captain, whose name he has forgotten, for two years and some few days and was discharged at New London, Bedford County, Virginia on the ______day of_____AD 178_.

He recollects that he was discharged as aforesaid a few months after the surrender of Lord Cornwallis at Yorktown.

That when he entered the service he resided in Pittsylvania County, Virginia, and his father, Joshua Abston, at the time of his enlistment was a Captain in the Virginia Militia.

He states that the troops marched from New London towards Richmond where they turned south and went to North Carolina. He states that he was in the Battle of King’s Mountain and was encamped for a short time at Ninety Six.

The only staff officer he now has any recollection of was col. Washington. That Thomas Smith, Thomas Hancock, and William Stranger volunteered at the same time he did. He states that he has no documentary evidence of his service-his discharge having been destroyed by fire, and he knows of no person whose testimony he can procure who can testify to his service.

He hereby relinquishes every claim whatever to a pension or annuity except the present, and declares that his name is not on the pension roll of any state.

Signed: John Abston by marking X as his mark

Sworn to and subscribed by the said John Abston the day and year aforesaid. Witness my hand and the seal of said Court, this 4th day of February AD 1857. George H. Pegues, Chief Justice of Collin County, Texas.

N.B. The scrawl below the name and mark of the applicant is the attempt he made at signing his name and his blindness and extreme old age prevented his making it more legible hence the reason for having him make his mark. Geo. H. Pegues, Chief Justice.

His claim for a pension was denied because, at age ninety-six years he could not present documentary evidence of his service or the testimony of comrades who could state that he was a soldier of the American Revolution.

His grave is marked with a Sons of the American Revolution bronze plaque and by a gray granite marker which reads as follows:

IN MEMORY OF JOHN ABSTON

The National Society of the sons of the American Revolution, Louisville, Ky; Genealogy Records. 1997.