COOK, JOHNATHON
JOHNATHON H. COOK
Family history.
Johnathon H. Cook, who was born Jan. 1828 in Missouri and died Nov. 1917 in Collin County, married Miss Julia Ann Lanham. To this union were born six children: James William (J. W.),born Oct. 1849, died in 1934; Sylvester, born Oct. 1852, died Nov. 1935; Margaret Jane Cook; Laura Cook; Mack; and Van Cook. Later J. H. Cook married Margaret (Peggy) Winder, born July 1842, died Oct. 1911. She was a widow with two children, John and Alice Winder. Johnathon H. Cook came to Collin county with his family in 1859 and lived north of McKinney for a time. He bought more than a hundred acres of land in Lucas area. He remarked he would sell a plot of land only to a doctor and a blacksmith. In time a doctor and a blacksmith bought enough land from Mr. Cook for a home and office and a shop.
Mr. and Mrs. J. H. Cook’s first child, J. W., married Elizabeth Bowman of Lucas; Sylvester Cook married Mary Ellen McKinney, daughter of John Myers McKinney (a minister) and Mollie Ann Coffey McKinney; Margaret Jane Cook married Elkanah Spurgin; Laura Cook married George Bradley. Their daughters were: Lola, married Ed Dutton of Allen and Hattie married Hervey Walker. Van Cook married Bill Campbell. Peggy Winder (Mr Cook’s step-daughter) married John Doyle, a teacher in the Lucas school. All of Mr. and Mrs. J. H. Cook’s children grew up in Lucas, but the one that stayed longest, reared his family here was J. W. Cook. In Feb. of 1883 Mr. and Mrs. J. W. Cook bought 62 acres of land one-half mile from the Lucas store, from George White and built a home. It was here that most of their children were born and all lived to be grown as follows: Otelia, Willie, Allye, Ruth, Dean and Earl. Otelia Cook married Tom Burch of Wylie, where they reared their family. Willie Cook married R. P. (Bud) Spurgin of Lucas, where they lived all their lives. Allye Cook married W. M. Anderson of Lucas. They were landowners and continued to 1ive here. They had no children. He died in 1940 and she died in 1972. Ruth Cook married J. L. Graham of Lucas. They continued to live here until his death. They were the parents of four children: Leo, Eustace, Willie and Eunice, all grew up in Lucas. Leo married Jessie Armstrong of Forest Grove; Eustace (Buddy) married Louise Anderhub of Wylie; Willie married Joyce Ballew of Allen. Eunice married Virgil Richards of Al1en and now lives in McKinney. Dean Cook married Carey Pharr of Lucas. They are the parents of three children.
Earl Cook married Miss Gray of Lucas. They have a daughter, Erin, who married Joe Henry Leach of Allen. They live in McKinney.
Sylvester F. Cook and Mary Ellen McKinney Cook lived in Lucas many years. They were the parents of six children: Charles Monroe Cook married Core Pharr. Alvona Cook married Bob Bowman. Lawrence Cook deceased. Myrtle Cook married Dick Faulkner. Joe Lee Cook married Lennie Pharr, daughter of Mr. and Mrs. D. N. Pharr of Lucas. To this union were born three children: Manley A. Cook, now of Big Spring, Texas, Bernice, who married Hugh Straughan of McKinney and Agnis who married Armer Mitchell and lives in Big Spring. Eva Florence Cook married Carl Berry. All of this family at one time or another lived in Lucas.
Tom Spungin, the oldest child of Elkanah Spurgin and Margaret Jane Cook Spurgin, married Lizzie McKinney. He and his family lived in Lucas many years. One of their sons, Ernest, died here and another son, Milford is a Lucas city councilman.

COLLIN PIONEER PASSES AWAY AT M’KINNEY HOME
JONATHAN COOK HAD LIVED HERE SINCE 1852 – HIS DEATH MOURNED.
Newspaper, 1927.
Another Collin county pioneer has answered death’s call! Jonathon Hammer Cook is dead. He passed away at the home of his son, S. F. Cook, on South College street, Wednesday night, November 28. He had been ill a few days of la grippe and the night before his death was stricken with paralysis which hastened his passing.
“Uncle Jonathon,” as he was familiarly known to his many friends, was born January 31, 1826, and was therefore 91 years, 9 months, and 28 days old at the time of his death. He was born in Illinois, and was the son of Asa Cook and wife.
In 1847, he was married to Miss Julia Ann Latham in the state of Missouri and with his young wife came to Texas and settled in the Lucas community, south of McKinney in 1852, where he lived for more than a half a century. His wife died at her home there on June 21, 1872. Seven children were born to them, four boys and three girls. Two sons died in infancy, and two, Jim Cook, of Lucas, and S. F. Cook of McKinney, still survive. Two daughters also reside in this city, Mrs. M. J. Spurgin and Mrs. Laura Scott. The deceased was married the second time to Mrs. Margaret Winder, on February 15, 1874, she having two children, John Winder, who resides in Hansford, [Hansford] county, Texas and Mrs. John Doyle, wife of a prominent McKinney attorney. One chid was born to this union, the Rev. G. M. (Mack) Cook, a prominent Baptist preacher who resides six miles west of McKinney. In November 1903 the deceased and wife moved from Lucas to McKinney, where his last wife died on October 28, 1911. The deceased had resided in this city since 1903. He had 19 grandchildren, 46 great-grandchildren and t3wo great-great-grandchildren.
The deceased was an ex-Confederate soldier, having served through out the war between the states. He was a firm believer in th rights of the South and made a valiant soldier of the cause.
In his early manhood he joined the Christian church near his old home. When the church was established at Forest Grove he moved his membership there where it had remained until he passed to his reward.
The funeral services were held at the Forest Grove Christian church at 12 o’clock today. The Rev. M. A. Smith, pastor of the Christian church at Wylie and the Rev. J. Ben Snider of McKinney conducted the services. Burial took place in the cemetery nearby. 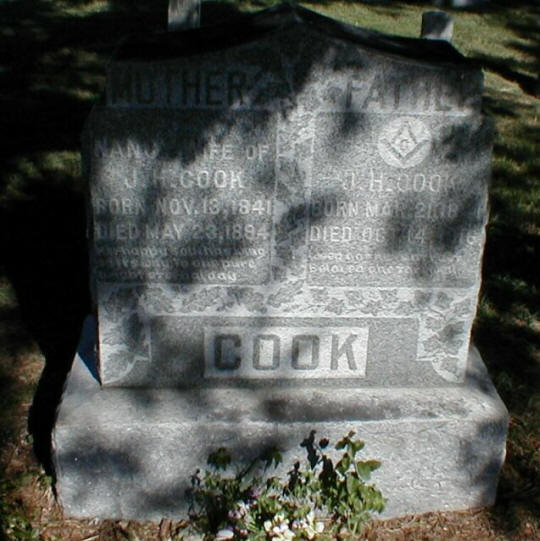