Hall surname
Helen Hall
Helen Gibbard was born in Indian Territory. She graduated from Southeastern Oklahoma State College in Durant, OK. She was a history major and did graduate work at North Texas State University in Denton.
She married Capt. Roy Hall in 1936. She was a school teacher in McKinney, Texas. She was also a newspaper columnist. She wrote a column called "Historical Vignettes" about historical events that happened in Collin County. She was co-author with her husband of COLLIN COUNTY:PIONEERING IN NORTH TEXAS. She was also the author of THE WAY IT ALL BEGAN:McKINNEY, TEXAS, A HISTORY. 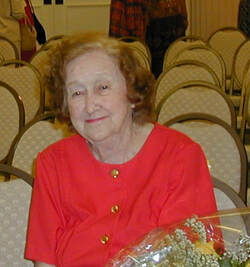 Helen Hall was awarded the Yellow Rose of Texas by the governor for her community service.