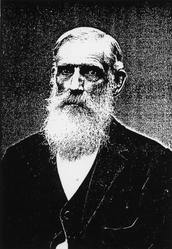 UNCLE JACK FAIRES DEAD
McKinney Daily Courier, October 20, 1902
Was Found Dead in His Bed This Morning
SEVENTY NINE YEARS OLD
Came to Texas in 1854 From Tennessee. Was an Exemplary Citizen, Loved by All
The majestic oak which has stood the test of many storms and winter blasts – whose kindly boughs and restful shade have welcomed the wayworn during the summer’s heat, falls to earth from whence it sprung.
“Uncle Jack Faires is dead,” are the say words that passed swiftly around this morning.
The deceased had been in feeble health for about four weeks, owing to cessation of circulation of blood, especially in the lower limbs. He said there was no pain but his breathing was difficult. On Thursday the writer visited him in his room and found him engaged in sharpening a saw. He said that he felt as well at work as he would to be in bed. On Friday he was moved to the home of James Faires, his son just south east of the square. Last night he retired as usual. This morning at an early hour the family made an effort to arouse him from slumber, when to their astonishment he was cold in death.
On the 13th of this month the deceased was 79 years old. His wife Loumyra Pullen, died many ago. Three children were born to them as follows: Jim Faires, who resides in McKinney, John Faires, who is now in the Territory, and Mrs. Mary Rainey, who died several years ago, leaving a husband, Jim Rainey, and two children, who live at Allen, Tex.
The deceased has two brothers, Lee Faires at Leonard and Bill Faires of Denison. Aside from these relatives, several grandchildren survive him.
He was a native of North Carolina but moved to McKinney from Columbia county, Tennessee, arriving here November 12th, 1854. Thus for nearly half a century he was resided in McKinney and at the time of his death was counted McKinney’s oldest settler living. He was a member of the Masonic order and a worthy member of the Christian church. He was truly an exemplary citizen, upright in all his dealings with his fellow man. His modest, yet cheerful manners won for him a host of steadfast friends.
All McKinney loved “Uncle Jack” and his kindly face will be missed by its citizenship. Quietly he passed to the farther shore. He loved and was devoted to duty in life. The cup of eternal joy awaits him on that flowery shore where dwells perpetual youth, unharmed by chilling blast so frequent in life’s struggles.
The funeral will take place tomorrow at 3 p.m. at the home of A. L. Gerrish on South Tennessee street. Burial at Pecan Grove Cemetery under the auspices of the Masonic order.