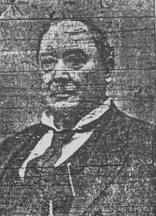 DR. G. A. FOOTE (GERALD ALEXANDER)
Biography.
Dr. G. A. Foote (Gerald Alexander) was born in Va. in 1823. He came to Collin Co., in 1845, age 22 from Mississippi. He served as a surgeon in Young’s 11th Tex. Cavalry. He was a Texas Legislator in 1865. He had a drug business in McKinney. He helped organize Collin Co., Bank (its president in 1880).
He married Eliza Jane McGarrah, daughter of Jack and Polly in 1847. He died July 23, 1902. There is a biography of him in the Daily Courier, July 17, 1902.
He served as contract surgeon for Capt. Wm. Fitzhugh’s rangers. He was paid $5 per day. He took it in land $1200 at 25¢ per acre.
Collin County had no doctor in 1845. In the summer a 22 year old Dr. G. A. Foote came to Buckner on an exploring trip. They begged him to stay but he had a practice in Mississippi. He did stay, though, not because of pleading, but due to pretty little Eliza Jane, daughter of the McGarrahs. He waited until she came of age two years later. He ministered to the needs of the pioneers for 56 years.

DR. GERALD A. FOOTE
Biography.
Dr. Gerald A. Foote came to Buckner and was the earliest physician in the county. He came merely on a sightseeing trip but fell in love with the daughter of Jack McGarrah and stayed on until she was old enough– then they were married and he served the sick of Collin County for 50 years.
G. A. Foote was a great-nephew of George Washington (his mother was a Washington) and lies in Pecan Grove Cemetery under an imposing marker.

FOOTE, G. A.
McKinney Daily Courier, November 14, 1903
MONUMENT IS FINISHED
ERECTED TO MEMORY OF LATE DR. G. A. FOOTE
TEX. GRANITE SARCOPHAGUS
Imposing Piece of Art Marking Grave of Pioneer Citizen and Physician.
The Dr. G. A. Foote family monument is being set up and finished in Pecan Grove cemetery and will be ready for inspection tomorrow. Judge T. C. Goodner and Capt W. A. Rhea, executors of the will of the late Dr. Foote, awarded the contract to a Fort Worth firm after receiving bids from numerous monument dealers. The will set aside $2500 for the purpose but the executors succeeded in getting it done for $2000. Even at this amount, it is the costliest monument in the county. It is about nineteen feet high and of the sarcophagus design, broad base and substantial, the material being Texas gray granite. The front is embellished with the Knights Templar emblems with the inscription “Foote” underneath. The monument is an imposing work of art, erected to mark the last resting place of one of Collin county’s most distinguished citizens and early pioneers.

FOOTE, G. A.
Courier Gazette, September 3, 1915
FORTY YEARS AGO IN OLD ____
Monday while a visitor to the office of our friend, J. Ed Rhea, we had the privilege of looking over some private papers recently taken from an old safe belonging to the G. A. Foote estate. Among these papers we noticed was some lithographed shares in “The McKinney Academy” issued to Dr. G. A. Foote in 1873. There were ten shares valued at fifty dollars per share. The history of the institution is unknown to the writer.
Among the other papers we noted were tax receipts from 1872 to 1876. In 1872 Dr. G. A. Foote (grandfather of J. Ed Rhea) rendered for taxation 16,000 acres of land all in Collin county on which he paid $446, the tax rate being a fraction over $1.00 on the hundred dollars. It is estimated that the present value of this land is over $1,000,000. The tax receipts were signed by G. R. Yantis, Deputy Sheriff.
In 1875, W. W. Merritt was Sheriff of Collin county. At that time the Sheriff collected the taxes. Among the papers were quite a number of unpaid interest bearing notes over forty years old. Also some old coins evidently prized by the owner.
Among the papers were two copies of the “McKinney Journal” edited and printed by Routh & Rudolph. One copy was No. 16, Vol. 1, dated Friday June 11, 1875. The other was dated July 9, 1875. The former was prized because it had a printed account of the tragic death by drowning of Lud A. Foote, son of Dr. G. A. Foote, in the Colorado river at Austin on June 7th, in the Austin Gazette of June 8th: the following appeared:
“Mr. Foote started in with his horse, as is customary, and reached the ripples or rapids just above the island, his horse went under and he was left to the mercy of the waters. His brother who was on the bank, seeing the danger he was in, started in with his horse to rescue him. As he reached the vicinity of his brother, who was struggling in the water, he detached himself from his horse, and tried to save his drowning brother, who spoke to him saying, ‘he was too far gone to be saved, and to save himself.’ The drowning brother immediately sunk, and it was then that the remaining brother found himself in a critical condition – his horse had gone and he left to the mercy of the water. A very strange incident here occurred. The horse after leaving his master and swimming some twenty yards, deliberately turned his head toward him and with all energy he could summon swam back to his master, jamming his head up against him. Mr. Foote was struggling, but caught hold of the stirrup leather and the horse carried him safely to the opposite side of the river. He was very near gone but his friend rolled him around and he was with difficulty brought to. He has since said that one hundred thousand dollars would not buy that horse. Rewards have already been offered for the body of the drowned brother, but as the river is very high, we doubt if it will soon be found. It is a very sad affair.”
The brother referred to was Ed Foot who died in South Texas several years ago and was brought to McKinney for burial. Among the papers were the original telegrams sent to Henry C. Herndon announcing the death and the efforts to find the body. The last telegram announced that the body had been recovered. A funeral notice read:
“The remains of Ludwell Foote will be interred Friday the 11th last at 4 o’clock p.m. The friends and acquaintances of the family are respectfully invited to attend.
The funeral will leave the residence at 3 o’clock and walk in procession to the Cumberland Presbyterian church.” Rev. W. P. Cloyd conducted the services. J. L. Lovejoy, Capt. W. A. Rhea and Lawrence Foote accompanied the body from Austin to McKinney.