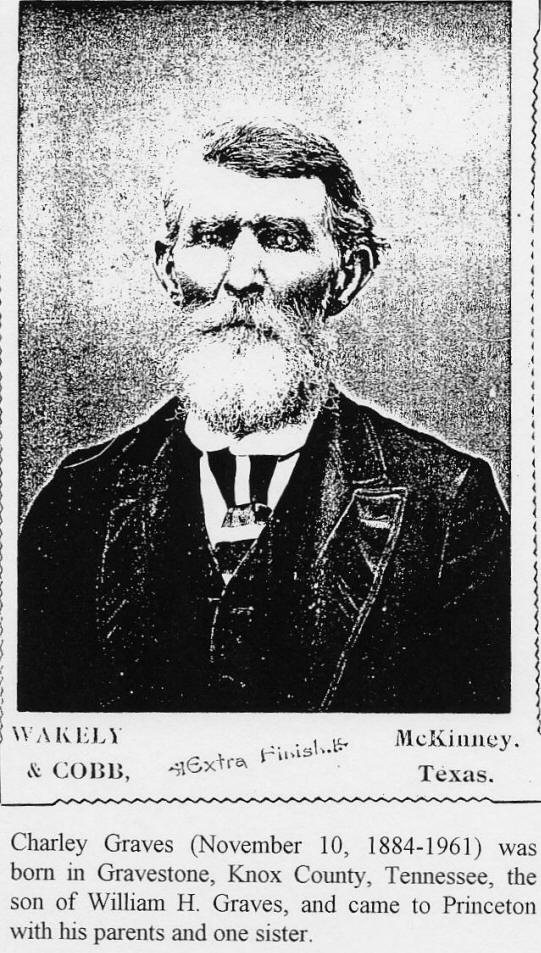 GRAVES, CHARLEY
Family history, by Wayne D. Graves.
Graves, Charley    –     1884 - 1961
Graves, Lectie    –     1890 - 1966
Charley Graves, born November 10, 1884, in Graveston, Knox County, Tennessee, son of William H. Graves, came to Princeton with his parents and one sister Bertha, 10 years his senior, in 1890. The family settled on a farm just east of Culleoka. In 1892 his mother died (buried in Higgins Cemetery). Later his father married a widow (formerly Emma Renfro) who had two children. Six more children, including twin girls, were born of this marriage.
In 1900 when Charley was only 16, his father died and left him the responsibility of raising a rather large family. During the next several years, living near Culleoka, Copeville, and Princeton, Charley was quite active as a member and officer of the Culleoka Lodge of Woodmen of the World, and also a member of the Baptist Church. He also served on the County Road Committee and the Culleoka School Board for several years.
In 1915, after rearing the large family, he was married to Lectie Campbell, daughter of the late Charles T. Campbell, whose family came to Princeton in 1911 from Woodbury, Cannon County, Tennessee. Their marriage was a double ceremony along with Mr. and Mrs. Dick Young of Culleoka. The ceremony was performed by the late Reverend Abe Enloe. Living on a farm a mile southwest of Culleoka, three children were born, Wayne 1917, Charles Clifford 1919, and Strelsa (“Pat”) in 1921. In the late 20's and early 30's, the family lived on a farm 2 miles north of McKinney adjoining the old Hall farm, across the road from “Uncle” Tom Shewmake. Charley had the pleasure of knowing Captain Roy Hall and his family quite well during these years.
In 1933, Charley and the family moved to another farm 2 miles north of Altoga for 3 years then returned to Princeton when he retired.
Charley was a firm believer in a handshake contract and that a man’s word was his bond and was well known for being a “man of his word.”
Charley and Lectie and Mr. and Mrs. Campbell are all buried in the Princeton Cemetery. Wayne and Charles now live in Garland, Texas, while Strelsa (“Pat”), who married Joe McGraw, lives in Colorado Springs, Colorado. Joe is the son of Lawrence and Kate McGraw, another long-time Princeton and Culleoka family.