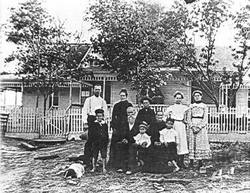 About 1910 Back row: W. G. Drake, Mary Rutledge Drake, Charley A. Drake, Katherine Drake McMenamy, Emine Drake Gist Front row: Felix Drake, Seated-Milton Rutledge, Everett Drake, Seated-Nancy Scott Rutledge, Felix Drake
DRAKE FAMILY
Newspaper, November 12, 1914
FAMILY REUNION.
On Saturday, November 7, the children, grandchildren and daughters-in-law of Dr. A. M. Drake, assembled at his home near McDonald for a family reunion. All of the children, four in number, fifteen grandchildren, eight great-grandchildren and three daughters-in-law, making a total of thirty, gathered under the parental roof for the enjoyment of the day. All brought well filled baskets and at noon the tables were set on the lawn and it was loaded with all the substantials and delicacies of the season. The afternoon was spent gathering pecans and in pleasant conversation.
Dr. Drake is a descendant of Sir Francis Drake of England. He came from Tennessee more than thirty years ago, a widower, with four small children; and located near McKinney. He was a physician, but gave up his profession to rear his children, which are as follows: A. D. Drake of New Hope; W. G. Drake of Enloe; Geo. W. Drake of Friendship, and Mrs. M. A. Stockwall who resides with her father.
Dr. Drake has been very active for one of his age but is getting feeble now.
Oh how they all did enjoy being together. And yet, it was so sad to separate as they may never all be together again.
May he live to enjoy many more such gatherings with relatives and friends is the wish of these editors.

DRAKE FAMILY
Newspaper, September 24, 1988
ANNUAL FISH FRY BRINGS 309 GUESTS TO DRAKE HOME
Lois and James Drake, who reside in FM 546 near Lowry Crossing, entertained 309 guests Saturday night, Sept. 24.
Mr. and Mrs. Drake, along with some friends, work very hard to make this annual event a special affair. Almost everyone who attends brings a covered dish or two and there is always plenty of food and drinks for everyone. Herman Farley gave thanks for the food.
This event is given in order to reunite friends both old and young. To the elderly it is something like the Old Settlers picnic that used to be held in McKinney some years ago, when people would come from far and near to meet old friends.
Mr. and Mrs. Drake thanked all who helped in any way to make this event a successful one. They also thanked the band who furnished such wonderful music, both country and spiritual.
The band included Mr. and Mr.s  Bulley Davidson, Rosie Davidson, Willard (Duf) Jordan, his mother, Mrs. Braswell, Mr. and Mrs. Wayne Vaughan, Mr. and Mrs. Johnny Marshall.
The birthday song was sung for Mrs. Bobby Parr of Lucas. Those who came the farthest distance included:
Mr. and Mr. [sic] Harold McMenamy of Lake Vista, Calif; Mr. and Mrs. Charles McMenamy of Las Vegas, Nev.; Mr. and Mrs. Forest Strickland of Mead, Okla.; Aubrey and Sara Williams of Oklahoma City, Okla.; Mr. and Mrs. Owen McMenamy of Fort Worth.
Also, Mr. and Mrs. Leonard Pennington of Springtown; Mattie Maloney and Dorthey Ronan of Arlington; Mr. and Mrs. Martin L. Lenderman of Tyler and his sister, Nannie Marguerite of Wylie; Mr. and Mrs. Floyd Rutledge and Wilma Grace Turner of Rockwall. Also, Mr. and Mrs. Wayne Teague, Mrs. Minnie Kindle of Sherman; Donnie and Debbie, Beckie and Jamie Drake, all of Paris; Felix (Sonny) and Nita Drake of Grand Prairie.
Among the eldest attending were Mrs. Dick Rutledge, 89, of Melissa; Floyd Rutledge, 83, of Rockwall; his wife, Deletha (Tommie), 84; Mrs. Lydie Frazier, 87, of McKinney; Homer Thomas, who will turn 82 on Oct. 17, and his wife Bertha, 75.
Some of the elderly whose ages are unknown included Mrs. Claudia Drake, Jessie Rutledge, Ida Cowan, Beatrice Vier, Mrs. Braswell, and Mrs. Marshall.
It was unfortunate some of the elderly who were regular attendants were seriously ill or had died during the past year. Mr. and Mrs. James Drake were extended congratulations for their 24th wedding anniversary on Oct. 4.