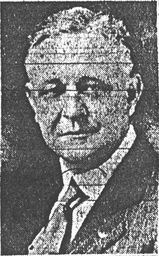 JOHN L. COMEGYS SERVICES HELD HERE THURSDAY
Newspaper.
Funeral services for John Lovejoy Comegys, 202 South Waddill Street, who passed away at 1:15 Tuesday in Wysong Hospital, will be held at 10 a.m. Thursday morning at the First Presbyterian Church.
Deceased was a member of a prominent pioneer family of McKinney, and had lived most of his life in McKinney, having been born at Gainesville, Texas, August 17, 1906, the son of Dr. C. G. Comegys and Margie Lovejoy Comegys. He was a retired business man of McKinney, and had been in the hospital for several months prior to his passing.
He was a member of the Lions Club, Chamber of Commerce, an elder in the First Presbyterian Church and several civic organizations.
Deceased, a Lt. Commander in the Navy during World War II, attended Washington & Lee University and graduated from the University of Texas, where he was a member of Phi Delta Theta Fraternity.
Surviving are his wife, Freda: stepson, William Charles Abernathy of Archer City, two grandchildren, one brother, Wilkins Comegys, three nephews, George Comegys of Dallas, Jewel and John Comegys of McKinney.
Active pallbearers will be Jewel Abernathy, A. H. Eubanks, W. B. Finney, Royal Stephenson, Kenneth Eubanks, Roland Boyd, Charles Adleta, Jack Foxworth.
The honorary pallbearers will be the Elders and Deacons of the First Presbyterian Church.
Reverend Sam Riccobene will conduct the services with interment following in Pecan Grove Cemetery, under direction of Turrentine-Jackson Funeral Home.

COMEGYS, SARA
Resolution.
We, the committee, appointed to draft the resolution on the death of Mrs. George Wilkins Comegys (nee Sara Abernathy) who passed away the Fifth of December, Nineteen Hundred and Sixty-Eight, submit the following report.
With great love and grief the members of the Jeanne d’Arc Club record the death of a dear and respected member, Sara Abernathy Comegys....
Sara was a person of unusual talent and was a valuable addition to any group of which she was a member. Working in all areas of church, civic, educational and social organizations, she gave freely of time and self to elevate them to the high principles of which believed. All of these will feel a greater loss in the losing of such a valuable member....
Respectfully submitted,
Mrs. Tom. W. Perkins, Jr., Mrs. T. E. Riggs, Mrs. W. B. Hope