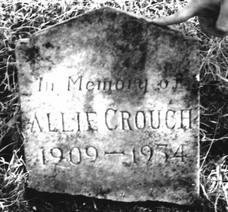 According to her death certificate, Allie Crouch was murdered in Dallas on March 5, 1934. She had a crushed skull.
Dallas Morning News, March 6, 1934
Clues as Trip Of Girl Come To Dead End
No Motive Found by Detectives in Hatchet Slaying of Allie George Kidd Early Monday
Alibi for W. Kidd
Body of Skull Crushed
Woman Found in River North of Dallas
Like the trail which led pretty Allie George Kidd, 24, from the quiet security of country life to the dizzy whirl of the city and to death in the industrial district at the hands of an unidentified hatchet slayer, all trails and clues which the city detective followed Monday afternoon and night in search of the slayer led to dead ends.
Numerous men and women who better knew her as Allie Wright were questioned at length, but no light was shed on who horribly mutilated the girl whose body was found Monday at 10 a.m. in the Elm Fork of the Trinity River, near the Neuhoff packing plant and between the North Dallas Industrial district at the new channel of the Trinity Rover. Her skull had been crushed by repeated blows with a hatchet or similar weapon.
Two men were placed in jail as material witnesses and were being held at night for further questioning. She was last seen alive, Detective Lieut. J. W. Fritz said, standing on the sidewalk near the corner of Harwood and McKinney. No one, he said, can be found who saw her when she left that place.
No motive, the officers said, has been established for which she could have been killed. She seldom, if ever, had enough money to cause anyone to wish to attack her for the purpose of robbery and her clothes were as inexpensive as she could find. Officers who knew her described her as quiet and apparently wholly inoffensive, almost meek, and warm hearted.
The men in custody are Walter (Doubles) Kidd, 22, her common law husband, and Jacob Gonzales, 40, of 2105 Cedar Springs, an elevator operator, who was an acquaintance of the dead woman. Both declared they knew nothing of any affair that might work. He immediately notified. After dragging the water for three hours firemen found the body thirty feet downstream from the bridge.
Hit Repeatedly.
Apparently she had been hit on the head repeatedly with a hatchet. One stroke cut through to her eye. Three other blows cut deeply into the brain. She was fully clothed except for her shoes and stockings.
In an effort at reconstructing the crime police said that apparently she had quarreled with a man while on the bridge in an automobile. Carrying the theory further, they figure she probably got out of the machine while angry and was followed by her attacker, who struck her with a hatchet or some similar weapon. An exhaustive search failed to bring the weapon to light, detectives stated.
She was the daughter of Mr. and Mrs. J. B. Crouch of the Garland community. She came to Dallas about five or six years ago, the investigators were told, and worked for a time in cafes. She had not been employed in recent months, they said. She lived for some time with Walter (Doubles) Kidd.
Kidd Found Insane
In 1930 Kidd was indicted for the murder of Mike Murphy, who was shot and killed at a cleaning and pressing establishment on Pacific avenue. Investigators frequently expressed doubt that his killing was done by Kidd, asserting that the shooting followed an argument concerning whisky and that Kidd may have been induced to assume a responsibility that was not his. In September, 1932, Kidd was found to be of unsound mind by a jury in County Court and was committed to the State hospital at Wichita Falls. He was released to his parents from there in October of the same year and since then spent several months t the State Tubercular Hospital at Carlsbad, near San Angelo.
“Walter seems to have quit his old ways,” his father said Monday afternoon. “He has been staying at home most of the time since he got back from the tubercular hospital and has been helping me a lot. He got home about 10 o’clock last night and stayed there until nearly 8 o’clock this morning.”
Police estimate that Mrs. Kidd probably had been dead between four and five hours when her body was found, thus setting the time of the murder at about 6 a.m.

Allie Crouch was born near Murphy. She attended school in Sachse. When her family moved to Garland, she moved to Dallas. The body was released to her sister, Mrs. Will Oliver, in Garland. The family is living on the Lum Tucker farm.
Garland News, March 8, 1934.