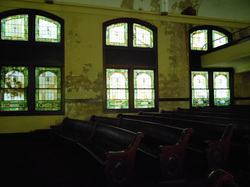 Actual work of razing the Central Presbyterian church edifice, corner South Church and West Davis street to make way for the new brick structure to be erected on the same spot, was started Tuesday morning.

Memorial services, the final rites to be held previous to the tearing down of the old building, were held Sunday. At the morning hour, a special Children's day program was given after Sunday school, after which the pastor, Rev. Chas. W. Estes, gave a complete history of the church.

Contract for the erection of the new building has been warded to J. H. Harris, Frisco contractor. The new edifice will cost approximately $35,000. It will be constructed of tile, brick, and ornamental stone, and will be one-story high with high ceilings.

As more of a memorial and a remembrances than anything else, some of the most durable and stoutest beams in the old structure will be used for support in the roof of the new building, it has been announced.

Following is a concise history of the Central Presbyterian church, compiled by Pastor Chas. W. Ester:

Seventy-five years ago, Collin county and McKinney were unknown, only as an unoccupied country, waiting for the coming of man.

How inviting, and what great things have been perfected during these years; a great county settled and improved; a wonderful city patented and built now a center of a great civilization, known all over the land.

One certain plate of land then containing 3, 129 acres of land, was patented September 6, 1850, and out of this plat of land 120 acres were set apart for the purpose of locating a seat of justice for Collin county and a donation for a town site.

October, 1871, James W. Thomas sold to Green W. Kerr, A. M. McCorkle and G. A. Foote, trustees of the congregation of the Cumberland Presbyterian church, in McKinney, Texas, and gave warranty deed for lot No. 175, where the church now stands for $150.00.

Along with the settlement of this great country, God directed in the work and guided men concerned in His kingdom to this open country, purchasing the land, and then directing one of His servants to this community in the person of Rev. W. S. Cloyd, who organized the Cumberland Presbyterian church, in the year 1871, in the Christian church building, then occupying the corner just west of where the present Christian church now stands, where services were held for a time until a school house was erected near where the Caldwell sanitarium now stands, and there services were continued until the old building was erected in the year 1874, during the pastorate of Rev. Quaile (deceased).

All the finishing lumber in the building was prepared and shipped here from Chicago, and the heavy dimension lumber is of full measurement, and when removed you will see the kind of material used in the early days to erect permanent buildings.

The gallery in the building, now used for the children, was first prepared for a place for the negroes to come and worship at all services.

The cedar trees on the lot were set out by Mr. George White about the year 1872.

This plat of Block No. 36  of land has been owned for these many years by the church, and was never used as a burial ground.

In this building the Methodist, Baptist, and Episcopal brethren have held services and many souls have been blessed inside these walls.

Mr. G. H. Dowlen, now one of the trustees, rang the bell and cared for the building for all the churches for worshipping here.

The bell that now is used by the negro church, is the one that at one time occupied a one hundred foot tower on this old building.

The following was filed March 20, 1925, in Collin County Deed Records;

The State of Texas County of Collin:

"Whereas, a local congregation known as the Cumberland Presbyterian church at McKinney, Texas, acquired by purchase a block of land known as lots 175, 176, and 203, 204 in Block No. 36, of the old donation to the city of McKinney, Texas, as shown by deeds from James W. Thompson to G. A. Foote, P. H. Bateman, W. S. Cloyd, G. W. Kerr and John Lovejoy, trustees of the Cumberland Presbyterian church at McKinney, Texas, dated August 18, 1873 and October, 1871, which are recorded in Vol. W. pages 232 and 233, Deed Records of Collin county, Texas.

"That said local congregation in a short time after the acquisition of said lots erected a church building thereon in which it has worshipped and conducted its religious enterprises and business from the date of the erection of said building down to the present time..

"That this local congregation concurred in the result of the Union preceedings of the Cumberland General assembly at Decatur, Ill., in 1900, and favored the union with and has acknowledged its allegiance to the Presbyterian church in the United States of American, and all its members claim now to be members of the united organization.

"That after said union said local congregation changed its name to Central Presbyterian church, U. S. A., McKinney, Texas, and it has continued to hold, use, occupy and enjoy sold property, and has been worshipping in the church building, located thereon, under its said new name according to the methods of the Presbyterian church in the United States of America, and has used the manse as a place of residence for the minister or pastor of the church, of their selection in accordance with the creed and confession of faith of the said Presbyterian church in the united States of America, from and since such union down to the present time.

"That there was no change in membership of this congregation by reason of the union of said churches, and said congregation still owns all of said block, except a narrow strip off the south side of said lots 136 and 204 and by said congregation acting by an d through said trustees of the city of McKinney, Texas, for street purposes in July, 1923.

This congregation is now incorporated under the above name, dated March 20, 1925."

An audience of interested people gathered at the new church building of the Central Presbyterian church corner of Church and Davis streets Thursday afternoon and enjoyed cornerstone laying ceremonies.

Reading list of articles placed in the copper box.

Complete enrollment of the Sunday School.

Complete enrollment of the Church Membership.

After these articles were placed in the copy box, it was sealed and placed inside the granite stone and the stone set in place and sealed....