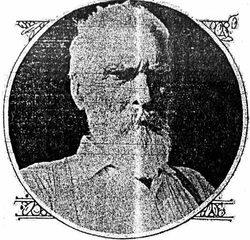 It can't be found on the map of Texas but old settlers in Collin county remember Nickelville - a struggling town on the southwestern frontier that held fair promise of growing larger.

But Nickelville didn't grow. When the railroad set up its new depot on the spot now occupied by Wylie, the little town to the south suffered a severe attack of desertion from which it never recovered. Later, as Wylie grew, it was absorbed by its more successful rival.

Today a weatherbeaten cottage is all that remains of Nickelville's former glory.

Passing by on a sunny afternoon, one is likely to see a white-haired patriarch sitting in a rocking chair on the front porch.

Question him, and if he's in a reminiscent mood, he'll tell you all about Nickelville - how it started and what happened to it. He is Dr. J. F. Butler, the only survivor of the former town and the earliest settler in those parts.

Dr. Butler is now 85 years old, but he was quite a youngster when he came to Texas by train, boat and wagon from Georgia in the early seventies. He is still living in the house he built when he settled in Nickelville - then a store and two or three shacks.

Dr. Butler has some interesting stories to tell about his early struggles. Collin county was an untracked wilderness when he moved to Nickelville and practicing medicine was not all that an ambitious young medico might desire. There were no roads - the scant population was widely scattered. Making calls upon the sick meant long rides on horseback over trackless prairies.

"I guess I've traveled thousands of miles in the saddle to administer pills," he told a visitor the other day. "There were no telephones or railroads or automobiles. Sometimes I wouldn't get any sleep for a week. I remember once of falling asleep while I was trying to mix up some medicine for a sick man. I told his little daughter to stick a pin in my leg if she saw me nodding. A moment later she jabbed me so hard I forgot all about being sleepy."

Nickelville was christened by the village wit, "Uncle" Tom Winn, according to Dr. Butler. Uncle Tom jokingly dubbed it Nickelville "because it was no bigger than a nickel," and the name stuck to the end of the town's days.

Dr. Butler grew tired of batching it alone after a few years so in 1882 he went back to Georgia and married, bringing his bride to Texas.

Prior to coming to Texas Dr. Butler saw four years service in the civil war as a captain of Company F., 26th Tennessee Infantry. He participated in virtually every battle in which the Tennessee troops were engaged and retreated before Sherman's drive with a tattered remnant of his company, barefooted and mounted on a donkey.

Dr. Butler is held in high regard by his neighbors. They say he might have spent his declining years in wealth had he been less generous in his youth. But playing good Samaritan, failing to collect fees and going on other folk's notes has left him in humble circumstances.

The foregoing story is reprinted from the Dallas Times Herald. The picture was made by Frank Rogers, staff photographer of the T. H. and the cut used by courtesy of that paper.