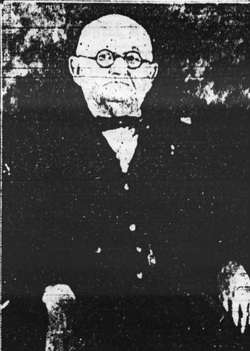 His beloved pastor Rev. E. H. Mays of that church of which he had long been an active member, official and large supporter with his personal presence as well as his means was in charge of the service, assisted by Rev. Amor? Bounds, presiding Elder, and Dr. R. L. Cowan, Pastor of the First Presbyterian Church and Dr. Clifford R. Weaver, Pastor of the First Christian Church. The church chancel hall, pulpit and choir loft were banked with an immense floral offering, beautiful and fragrant testimonials from friends and former patients for over the city, county and state. Interment followed on the family burying lot in beautiful Pecan Grove Cemetery under the direction of the Isaac Crouch Funeral Home.

Honorary pallbearers: Board of Stewards and Board of Trustees of the First Methodist Church.

Many friends and former patients of the doctor came from over the county and other ports of the state to be present and pay their last respects to the beloved physician, who had spent a half-century in the active practice in this county.

Dr. James A. Caldwell, M. D., was born at Bostonville, Arkansas, May 4, 1857. He was the son of Albert J. Caldwell, a native of North Carolina, who was a farmer of Arkansas for many hears and Mary E. Caldwell, a native of Maury County, Tennessee. In young manhood, the father moved to Tennessee where he was married then taking his bride back to Arkansas, where they lived until 1882 when they moved to Texas and located in the Climax community, about twelve miles east of McKinney, where the dear old parents spent the remainder of their lives and both died during 1906 within three months of each other's demise. Dr. Caldwell received his elementary and high school education in the public schools of Arkansas, following which he attended the Little Rock Medical College and then the Louisville Kentucky Medical College, from which he graduated with the degree of Doctor of Medical. Prior to his medical training, he has studied law and was admitted to the bar. After engaging in the legal practice for a short while he decided to enter the medical profession, in which he was active in the practice for over a half-century, making an outstanding success. He entered the general practice, at Climax in East Collin, in 1889, riding over a large surrounding territory, mostly on horseback, in those days preceding the building of good roads and the coming of autos. He built up an excellent professional business and rapidly attained to a commanding position among the practitioners of this county. He was an earnest student of his profession, taking post-graduate courses along through the years in the New Orleans Poly Clinic, as well as in the New York Polyclinics and hospitals— about forty-six years ago, her located in McKinney where his general practice rapidly grew. During this time he had earnestly devoted himself to study, research and investigation in the treatment and cure of cancer. His experience with a number of cases of this dreaded and loathsome disease encouraged him to devote himself exclusively to that specialty. Accordingly he opened a small sanitarium. His success in this specialty attracted such a great practice that he was soon compelled to erect his present large two story brick and stone sanitarium at 407 South Tennessee Street, located within five minutes walk of the public square and containing more than forty large and airy rooms and an immense basement and otherwise modernly equipped and maintained. An extensive flower garden identifies the front and block of the land on the south side of this large McKinney sanitarium. Patients came to him for treatment, not only from his home city, county and state, but also from most of the other states of the Union as well as from Canada. Even after he became unconscious last Saturday night, several former patients whom he had cured during past years from other parts of Texas and one from Oklahoma came by to visit him and others not knowing of his critical illness came to be treated and had to be turned away.

Dr. James A. Caldwell was married to Mrs. Scottie K. Puckett at Conway, Arkansas, January 24, 1878. His bride was the daughter of Willie Puckett, a native of Alabama, who later settled in the state of Arkansas. Mrs. Caldwell was a cultured woman and devout Christian worker, who died at the family home in McKinney, March 3, 1933. They were the parents of five children, two of whom survive—Gibson Caldwell, President of the Collin County Mill & Elevator Company, and a civic leader, widely known in North and East Texas, and Roy Caldwell, member of the big McKinney retail C. &. T. grocery store, in partnership with J. J. Thompson. Five grandchildren survive: Mrs. Paul C. Young of Dallas, James A. Caldwell, Jr. of Dallas. Goldie Mae Caldwell, Roy Caldwell, Jr., Texas A. & M. College student and Kathryn Caldwell, McKinney High School student. He is also survived by one brother, Dr. Albert J. Caldwell, Jr., eye, ear, nose and throat specialist of Amarillo, Texas.

While Dr. Caldwell spent a very busy life and was a hard worker in his profession, he nevertheless shirked no civic, fraternal or religious duty that any citizen could recognize regardless of his calling. He was a lifelong member of the Methodist Church, serving for forty years, as either a steward or a trustee of the First Methodist Church, and unless absolutely hindered by demands of his practice, he could always be counted on for attendance at church services, including mid-week prayer meeting. He was always liberal with his means in the support of various activities of the church, including orphanage, the old ministry, foreign as well as local church mission projects and enterprises. He was a longtime Mason, Odd Fellow and Knights of Pythias and Woodman. He loved people and enjoyed social relations with his fellow-man from the lowest to the highest stratas of society. His attitude was always friendly, cheerful and optimistic. No appeal for worthy charity ever turned away from him empty-handed. The many deeds of charity and substantial help in a quiet way by Dr. Caldwell and his lovable wife are proverbial in McKinney. His purse strings were always opened to appeals for worthy causes to a rare degree of liberality. His optimism, buoyancy of spirit and zest in living never forsook him even in his older days as the shadow lengthened and the light of life shone dimmer. He recognized that other of the learned professions minister to the needs of the people, but he ardently believed that none held more importance than that of the practice of medicine. Ailing mankind must depend absolutely upon the skill of his attending physician and surgeon, who ever holds the issue of precious human life in his hands. He truly devoted his life and talents to the amelioration of the ills of humanity.

His long, busy and useful life was utilized in the service of humanity and everyone felt that as his body was laid to rest in beautiful Pecan Grove Cemetery that he had truly brightened and blessed the world by having lived in it.