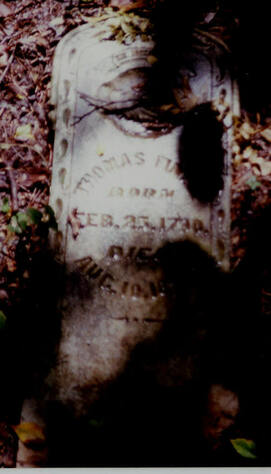 From the historical marker application for the Young Cemetery in Collin County.

THOMAS FINLEY –  Thomas Finley has two stones in the cemetery.  One says, "In memory" and the other reads, "In Heaven."  The dates on the two do not match.  One stone has February 25, 1790,  to August 10, 1859, and the other has March 15, 1790,  to August 10, 1859.  He was the husband of Charlotta Jackson Finley and a brother of Prudence Finley Jackson.    He was also an uncle of John and Francis Finley and of Charity Stowe Young.  He was born in North Carolina and married Charlotta Jackson in Madison County, Illinois.   His stones are on both sides of Charlotta's.  They are 2 rows east of  the stone for James and Emily Young.
Thomas Finley was a son of John "Fighting Jack" and Mary Haven Finley.  His family came to Rockbridge township in Illinois in 1821and erected a horse-mill.  Thomas Finley lived in Taylor's Prairie, just north of Rockbridge in Greene County, Illinois.   He was an ensign in Captain William Jones' Company in the War of 1812, which was an Illinois company.  Three of his brothers and his father were privates in the same company.  Captain William  Jones was said to be a brother-in-law of the Finleys.  The Finleys came to Collin County around 1854 and lived on the David Tucker survey, which  joined the Shadrick Jackson survey on the southeast.  Thomas Finley is listed in the 1860 Collin County Census Mortality Schedule as being sick for 4 weeks with the cause of death unknown. One of his sisters married John Cook and is buried in the Baccus Cemetery in Collin County.

CHARLOTTA FINLEY – Charlotta Jackson Finley was a sister of Shadrick Jackson, and the wife of Thomas Finley.  She is also an aunt of Charity Stowe Young and of John and Francis Finley.  She was born in North Carolina.   She was called "Lottie" or "Charlotte" in most records.  Her dates are: 1790 to January 12, 1878.  Her stone reads: "In heaven" and is between the stones for Thomas Finley.

JOHN FINLEY – John Finley was a son of Moses Malcom and Sarah Scott Finley of Illinois, and a nephew of Thomas Finley and Shadrick Jackson.  He was also a brother of Francis M. Finley.  He never married.  His dates are: June 1, 1827, to July 23, 1855.  His will was witnessed by Shadrick Jackson and Thomas Finley.  His stone is very crudely made with the inscription  on the east side, instead of the west.  It is east of the stone for Shadrick Jackson.

FRANCIS M. FINLEY – Francis Marion Finley was a son of Moses Malcom and Sarah Scott Finley, and a brother of John Finley.  He was also a nephew of Thomas Finley and Shadrick Jackson.  His dates are: October 29, 1833, to December 28, 1854.  He was married and his will was probated in Macoupin County, Illinois.  His stone is east of the stone of Prudence Jackson, and south of  John Finley's. It is very crudely made with its inscription on the east side, instead of the west.    On his stone the "s" and the "4" are printed backwards. 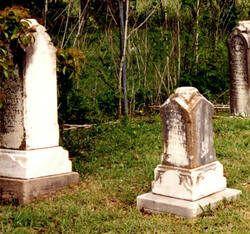