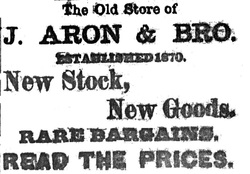 Historical Marker Application
Morris Aron was a prosperous merchant who ran a large mercantile store on the square, a popular place for the ladies of the county to buy their clothing. It was a prosperous business and in 1889 he and his wife engaged an architect who had been trained and educated in New York to design a lovely home for his family. [...] He only lived in the home six years, since it became apparent to him that Dallas would become the larger city rather than McKinney. Eventually he took his family back to New York to live. [....]

George W. Fox bought the home from the Arons in 1895 for $5000. The Fox family came to Collin County from Missouri in 1857 and settled seven miles west of McKinney and became extensive land owners. George was one of 14 children of this early pioneer, Charles T. Fox.

Fox sold the house to Mr. and Mrs. Plummer Harris for the sum of $4,500. The Harris family enjoyed the house for the rest of their lives, rearing their children there. One daughter, Florence Lea Harris Weaver, died in recent weeks and much of this story was given by her. After the death of Plummer and Josie Harris, the heirs sold it to Dr. and Mrs. Julius G. Smith paying $6,000 for it in 1951. [....]