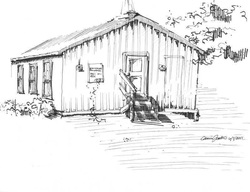 The first church for African Americans serving the Murphy community was started in a house on the Berryman land located east on FM 544 in 1939.  Mrs. Ollie Mae Halbert, who lived in the community, asked a Baptist minister from Dallas to help her organize a church for African Americans to assist the Murphy community.  Neal Callin was the first pastor of the church.

In 1950s the congregation moved to Brand Road east of Murphy Road.   The members first met under a grove of shade trees, thus the name Shady Grove.  As time and money permitted, members erected a white clapboard building beside the shade trees.  The congregation remained stable during the 1950s and 1960s, and beautiful music was heard wafting from the open windows and doors.  Bad times later hit the church and the church land was sold.

When the city of Richardson purchased the land, this section of Brand Road was renamed Park Vista.  Today, the ground where the church once stood is incorporated into Richardson’s Breckenridge Park.
Collin County Historical Marker 2011