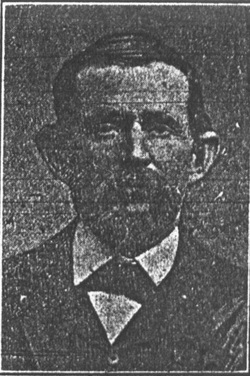 At 3:40 p.m., Jan. 23, 1913, Leslie Walker Bush of Allen lost his life in the collapse of the Odd Fellows Temple at McKinney, Texas. Mr. Bush was born at Winchester, Kentucky, September 8th, 1850. He came to Texas in 1856 with his father, Maj. Wm. M. Bush, and his mother, formerly Nancy Elkin, making the journey in private vehicles, before the day of railroads, and settling 10 miles southwest of McKinney in the old Rowlett community.

Maj. Bush was a veteran of the Mexican war, and commanded a regiment in the civil War. In his immigrant party was Achilles Quesenberry, now deceased. He was a cousin of Capt. W. N. Bush of the Bethany neighborhood, now deceased, but whose sons, Messrs. Price and James Bush, reside at Allen.

Mr. Bush was a devoted member of the Christian church, uniting at old Bethany Church in 1877, under the preaching of the late Dr. Addison Clark. He removed to Allen in 1884 and has resided there since. He was noted for the love he showed to his neighbors and friends. His house was always open to the guest, even to the stranger, and he delighted to entertain his friends, especially the ministers and representatives of the institutions of the church. It was the habit of a lifetime to visit the sick and to be present and sympathize with the bereaved.

By nature a man of affairs, and by dint of effort and good management, he acquired a substantial estate, but he was liberal with his means towards education and religion and never permitted a case of want to pass unsupplied. Tho’ his call came unexpectedly, no man was more ready to meet it. He often talked of heaven and rejoiced always for the hope which was his, through Jesus Christ. The funeral services were held at his late residence at Allen at 12 o’clock Saturday, Jan. 25, 1913, conducted by his former pastor, Rev. Eugene Holmes, assisted by Elder R. C. Horn and Rev. M. A. Smith. The remains were tenderly borne to their last resting place at Pecan Grove cemetery, where Rev. Graham McMurray of Greenville spoke a few words of comfort to the sorrowing ones. Tho’ it is hard to see the hand of God in all things, we can but trust that in his infinite mercy he will bring everything to work out for our eternal good. May we all so live that – ...