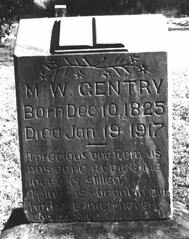 GENTRY, W.M.
McKinney Democrat, January 25, 1917
A NONAGENARIAN PASSES TO REWARD
W. M. Gentry, a resident of Collin county for more than half a century, died at his home in the Murphy community Thursday night. He had been in feeble health for several years. Deceased was a native of Tennessee, and was 95 years old. He was a member of the Baptist church. Funeral services were held in the Baptist church at Murphy Friday at 2 o’clock, conducted by his pastor, Rev. J. S. Cameron, assisted by his former pastor, Rev. J. Ben Snider, of McKinney. Burial was made in the Murphy cemetery.
Deceased is survived by his wife and one daughter, Mrs. R. A. McMillan, of Murphy.
***
Pioneer Collin Settler
The deceased came to Collin county before the late Civil war, settling near Plano. He went through the war without receiving a scratch.
During the early days of Collin county Mr. Gentry was engaged in teaching school
For a number of years the deceased was on the old Star Route mail from Parker to Murphy. Some years ago he moved to Smithfield in Tarrant county where he lived for a number of years and was justice of the peace at that place for several terms. His wife, who was Miss Eliza Daniels before her marriage survives. With the exception of the time they lived in Tarrant county he always made his home in Collin county near Murphy.
The deceased in politics always voted more for the man than for the party, having voted the Republican ticket a number of times and the Democratic ticket a number of times. He had seen that section of Collin county converted from a wilderness to one of the most highly improved agricultural districts of the county, with its fine homes, excellent school and good churches.

GENTRY, WESLEY
Plano Star-Courier, January 19, 1917
AGED CITIZEN OF MURPHY IS DEAD
Wesley Gentry, an aged citizen of the Murphy community, six miles east of Plano, died at the home of his son-in-law and daughter, Mr. and Mrs. R. A. McMillan, last Thursday night after a long illness, with the infirmity of old age. He came to this section of Collin county fifty years ago as a teacher in the public schools. He leaves but one child, Mrs. McMillan, but has a brother, William Gentry, who lives at Mesquite, in Dallas county. He was ninety-one years of age.
The burial was at the Maxwell cemetery, a mile north of Murphy, Friday afternoon.