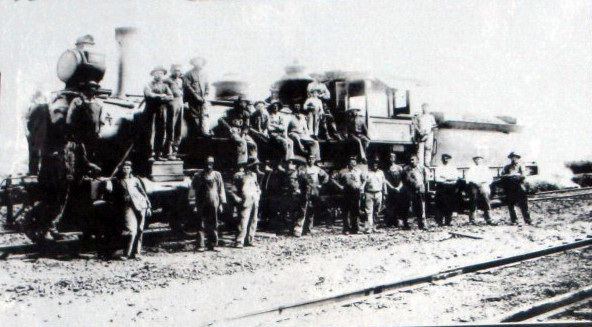 In the years around 1910, the air in Josephine, Texas, smelled of sulphur as the Cotton Belt Railroad made “Gumbo Gravel.”
Long trenches were dug with steam shovel. A layer of crossties were placed in the trenches. Then a layer of coal and a layer of dirt were placed on the crossties. The area was watered to keep the coals from burning too fast. This process was used in making the reddish gravel known as “Ballast Gumbo Gravel.”

Mr. and Mrs. Harvey were in charge of burning the coals. Engine Number 4, also known as a Dinky, was used in transporting the gravel to the main railroad line.

The Cotton Belt Railroad used the “Gumbo Gravel” in making the railroad track from Fort Worth to Texarkana, Texas. The “Gumbo Gravel” was used to hold the crossties in place and keep them from washing away.

Three pits were created on the Jordan land about two miles north of the Josephine business section. Later, two more pits were dug on the Hubbard land south of the original pits. As a result, small lakes were formed.