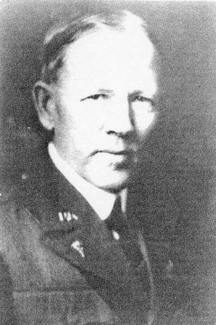 CARL ROGERS DARNALL, M. D. (1867-1941)
Biography
Brigadier General, Assistant Surgeon General, U. S. Army, Distinguished Service Medal, Originator of modern method of water purification and inventor of the chlorinator
In support of a proposal that the new Army Hospital at Fort Hood, Texas, be named “The Darnall Army Hospital” in recognition of the contributions of Brigadier General Carl Rogers Darnall, M. D., a native Texan, to medicine and public health.
Born on his father’s farm in the Cottage Hill Community near McKinney, in Collin County, Texas, on Christmas Day 1867, Carl Darnall was the eldest of seven children of Reverend Joseph Rogers Darnall, minister of the Christian Church, and Mary Ellen (Thomas) Darnall.
General Darnall’s most important contribution was his discovery of the value and feasibility of using compressed liquified chlorine gas for the purification of water – and his invention in 1910 of a practical apparatus to utilize compressed liquid chlorine for the purification of municipal water supplies, sewage, swimming pools, and water supplies for troops in the filed. His method, developed and perfected through years of patient research in the basement laboratory of his home, is now used throughout the world.
General Darnall was one of the nine all-time medico-military “greats” in the field of preventive medicine, featured by the American public Health Association exhibit in New York City at its 1949 convention....
The U. S. Army and U. S. Air force Recruiting Services pictures Dr. C. R. Darnall in the August 16, 1948, issue of Time Magazine, and stated that “he discovered the liquid chlorine method of purifying water. In lives saved, and other indirect benefits, this is one of the most far-reaching medical advances in history.”
During his Army career, General Darnall served in the Spanish-American War, the Philippine Insurrection, the Boxer Rebellion in China, and in World War I he was Director of all U. S. Army Medical Supply activities. His last assignment before retiring was that of Commanding General of the Army Medical Center and Walter Reed General Hospital in Washington, D. C. and, concurrently, he was Assistant Surgeon General of the Army....
General Darnall received his primary education at a country school near his father’s farm in Collin county, Texas. He then attended Carlton College in Bonham, Texas. From there he went on to Transylvania University, Lexington, Kentucky, and then to the Jefferson Medical College, Philadelphia, Pa., where he received the degree of Doctor of Medicine. After receiving his commission in the Army Medical Corps, his first assignments were to stations in Texas – Fort Clark at Brackettville and Fort McIntosh at Laredo, where he remained until the outbreak of the Spanish-American War in 1898.

DARNALL, CARL ROGERS
The Celina Record
ARMY HOSPITAL NAMED FOR NATIVE OF COTTAGE HILL
.... a clipping from the Austin American, which tells of the dedication of a new US Army hospital named for a native of the Cottage Hill area near Celina....
The Austin American story, somewhat abridged, follows:
“A new U. S. Army hospital has been named for and was dedicated to the late Brigadier General Carl Rogers Darnall, MD, a native Texas, in recognition of his contributions to military medicine and public health.
“The late General Darnall was the father of Colonel Joseph R. Darnall, (Ret) of Austin. Col. and Mrs. Darnall have lived here since 1953 when he retired from the Army Medical Corps after 35 years of service. his last station was Frankfurt, Germany, where he served for three years as commanding officer of the 97th Army Hospital.....