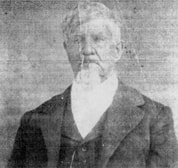 William Murphy and his wife Dorothy Hudiberg Murphy moved to Collin County in the 1850s from Morgan County, Indiana.   William and Dorothy purchased land first near Dublin in Collin County and later in the Maxwell settlement.  After the Civil War residents of the community sold lots to develop a town between FM544, Murphy Road, and Maxwell Creek called Decatur with the hope of the railroad passing through the area.  The business venture was not successful since the railroad did not pass through the community at that time.  However, when the town applied for a post office in 1884, they found there was already a Decatur, and the town was named Maxwell.  When the railroad finally arrived in Maxwell in 1888, the William Murphy family donated land and the right-of-way for the depot.  The new depot was named Murphy, and the community changed its name to Murphy.
Murphy was thinly settled and dotted with high native grass and wild game.  William Murphy was a great hunter in the early days, and there were plenty of rabbits, wild turkey, and bears to feed the growing family of five boys and six girls.
“Grandpa” Murphy, as William preferred to be called in later years, was an elder and member of the Christian Church for nearly half a century.  He was a congenial man known to be an industrious and patriotic Democrat.
When Susan Emberton, his sister, died in 1872, William Murphy set aside land on his farm for the family cemetery.  This became the Murphy Family Cemetery located near the juncture of Tom Clevenger and Maxwell Creek Roads.  William and Dorothy Murphy, Collin County pioneer family, and other Murphy family members are buried in the family cemetery. Collin County Historical Marker (2011)