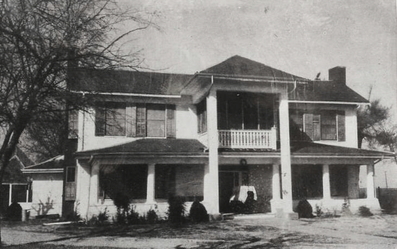 The State of Texas has awarded a Historical Building Medallion to the old Isaac F. Graves home on Highway 24, west of McKinney. The house was selected by the committee as a structure "of historical, architectural and cultural significance to the area in which it exists.

In 1857, Isaac Graves brought his family and slaves to Texas from Virginia, by way of Missouri. The latter part of the trip was made in a carriage built for the Governor of Missouri and purchased by Mr. Graves for $850. On arriving in Collin County, Mr. Graves purchased 1000 acres of land at $12.50 an acre, paying for it in gold. The house, which was begun immediately, was built of oak and hard pine hauled by oxen from Jefferson in East Texas. The inside walls were of hog hair plaster, most of which are still intact.

Isaac Graves lived in the house until his death in 1886. In his will he land was divided among his children and the house and surrounding acreage was given to his youngest daughter, Mollie, who was married to F. B. Cameron. Mollie and F. B. had six children: Mrs. Maggie Lott, F. G. Cameron and Sims Cameron, all three deceased; Mrs. Henry Miller, Miss Ione Cameron and George Cameron. The house and land, at present, is an estate owned by these six children or their heirs. George, the youngest child and only living grandson of Isaac Graves, was born in the house and still lives there, operating the estate.

Since 1857, the house has been owned and occupied by members of the Isaac Graves family. The house has been remodeled and additions made to it at various times, but the original structure is still intact, including two 2-story chimneys and the old well house.

The original doors are still in use, complete with locks and oversize brass keys.

During the 105 years of its existence, the house has been a center of social activities. There are many stories connected with the old house. One interesting story is that Jesse James and members of the Quantrell band spent some time there.

George Cameron farmed the land until his death in 1973, thus making it 116 years that he owned and farmed and lived in the house.
GRAVES HOME
McKinney-Courier-Gazette, 1984.
Historical Vignettes, by Helen Hall
HISTORIC HOME BEING RAZED TO BUILD MALL
With the razing of the old Isaac Graves home on Hwy. 380, Collin County is losing one of the most historic landmarks of the area.
The Graves Home was awarded a Texas State Historical Medallion back in 1957, the first one awarded in Collin County after the Historical Survey Committee began its work.
The second one awarded the same years was the old Collin McKinney Home in Finch Park. It burned in December of 1980.
The Isaac Graves family, along with the Muse family and the Albert G. Graves family, arrived in Collin County from Virginia in 1857.
Isaac Graves bought 1,000 acres, paying for it in gold, and set about making a home. [He bought it from to Dr. G. A. Foote paying $12.50 an acre .]
The lumber for this find old home was freighted overland from Jefferson and was all heart pine and oak.
The actual building was done by the sons and by the slaves who belonged to Graves. It was still sturdy after 126 years of use....
My husband’s father came to Collin County at age 17 and worked on the Graves ranch.
He told many interesting things about the adventures they had, getting in the great crops of wheat, cradling it by hand, stacking it to dry, and threshing it in the most primitive manner.
His fondest memories of the place were the visits that the James Boys and others who served in the Confederacy under Quantrell paid the Graves family.
They often stayed for weeks at a time, and it was a great thrill for young Steve Hall when they invited him to ride in to a local saloon at night.
He, like most southerners, looked upon the men who served with Quantrell as the greatest men of their time.