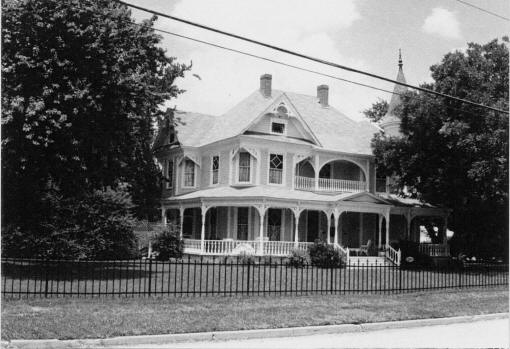 CARPENTER HOUSE
Plano Star Courier, February 26, 1969, by Marquerite Haggard
TWO CENTURIES OF HISTORY
LANDMARK HOMES OF PLANO RECALL MEMORIES, PEOPLE AND EVENTS
...EXEMPLIFIES ‘90'S
Another well preserved house and exquisite example of the ninety period is the home of Mr. and Mrs. Jack Haley at 1211 16th Street.
The Haleys have lived in Plano about twelve years and Mrs. Haley tells an intriguing story of a house that charmed her family into making Plano home. Mr. Haley bought the Carpenter house as an investment, but as the Haley family began visiting the place and seeing its possibilities, they became more interested in the house.
After coming to Plano for week-end stays and visits and fixing up different parts of the house, the Haleys decided to move for good and renovate the house. The son, James Arthur, liked having a place for his horse.
Renovation called for reroofing, levelling, painting, and modernizing with additional bathrooms, but the Haleys carefully preserved the essential decor of the house.
In the renovation process, Mrs. Haley says the carpenters found lumber that is no longer made: 2 x 6's and 2 x 8's and long supporting lumber that reached from the floor to the roof, all one piece. Too, the house’s original carpets, were found to be sewed together, in narrow strips in the curious way that early carpets were made.
The son of Col. Henry C. Overaker who built the house in 1898 told Mrs. Haley that when the house was built, it was entirely surrounded by a cotton patch.
The Overakers were prominent in the civic and cultural life of Plano. During 1873 Col. Overaker served as the 8th Postmaster of the town, and Miss Maude Overaker was a fine musician,. Their home provided a graceful background for the lively social and cultural life of the era. Some members of the Overaker family still live in Dallas.
For nearly three and a half decades the house was called the Carpenter house because the G. E. Carpenters lived in it that long.
Mrs. Evelyn Carpenter Housewright says her Mother and Father moved in from their farm northwest of town in 1919 after she was married but Edgar Carpenter, were at home until they finished their schooling and married. At intervals Mrs. Housewright lived with her parents, particularly during the last days of their lives. She says she practically reared her daughter, Mrs. Doris Ann Graves Ingram, in the hospitable old house.
Gipson Edgar Carpenter, known generally as “Gip”, was one of Plano’s leading citizens. He was a son of Captain Robt. W. and Elizabeth (Lizzie) Ann Carpenter, early settlers in the Bethany community. G. E. Carpenter was an 1883 graduate of Add Rann College at Thorp Springs. He later taught there two years before returning to Collin county to practice law. G. E. Carpenter’s name will be found on many of Plano’s legal documents, and the kind, scholarly gentleman will never by forgotten by anyone who ever knew him.
Since coming to Plano, one Haley son, James Arthur graduated from Plano High School and is now married. Another Haley son, Jack H. Jr., with his wife and two children, has recently come from Houston to Plano and at this time they are making their home with the Senior Haleys. There’s more than beauty to a house that can welcome another family with ease, and it is good to hear Mrs. Haley say of her home, “We just love it.”