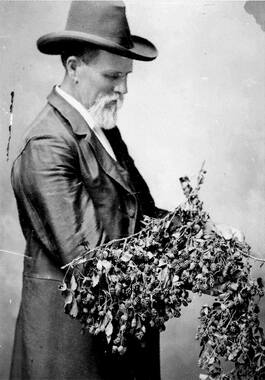 ELBERT WILEY KIRKPATRICK
Biography.
General E. W. Kirkpatrick was born near Whitesburg, Tennessee on October 12, 1844. His father and mother were Jacob M. and Sarah Jane (Campbell) Kirkpatrick. He had one younger brother and seven sisters.
The family arrived in Collin County in 1854. A year or so later the father died and young Elbert, then 13 years old, took complete charge of running his mother’s farm. For the most part, he was self-educated, however he did attend a private school a few miles south of McKinney for a few months.
When the Civil War broke out, the recruiting officer, knowing that his mother needed him to operate the farm, refused to let him enlist until he was 18, the latter part of 1862. At that time he enlisted as a private in Company I, Martin’s Texas Partisan Rangers, DeMosse’s Brigade, Cooper’s Division, Marmaduke’s Corps, Trans-Mississippi Department. After the war ended he was honorably discharged in South Texas in May 1865, and returned to his home in McKinney to take charge of his farm.
In 1872 he taught the first public school in Collin County. He was always a strong advocate of Free Schools although at the time there was strong opposition to the idea of free schools for every child.
On November 5, 1874 he married Emily Terrell Clive of McKinney and to this union were born six children. Mr. Kirkpatrick began growing, experimenting, and improving trees and plants of all kinds and in 1874 he established his first nursery at White’s Grove.
When the Texas Nursery Company of Sherman was organized, he was elected president and served in that capacity until his death. He also served as president of Whitesboro Fruit Company, the Nueces Land and Immigration Company, and was a director in the Durant Nursery Company, the Collin County Mill and Elevator, New Century Milling Company, and the Burrus Milling Company of Dallas. He served as President of the Texas Industrial Congress in 1908 and 1909. He helped organize both the state and national Nurserymens Association, and served as president for several years in them. He was a charter member of the National Nut Grower’s Association and served as president for several years. He was active in forming a State Nut Growers’ Association and on May 29, 1906 it was formed and he served as its first president.
Gen. Kirkpatrick helped to organize the Throckmorton Camp, United Confederate Veterans, No. 109, at McKinney in 1888. He was Commander of the camp at the time of his death. Each year he entertained the veterans at his home.
During World War I he served as a member of the Texas State Council of the Y. M. C. A., War Fund Committee, and as a member of the food conservation organization of the State of Texas. He was a Mason, an Oddfellow, an Elk, and a Rotarian. He was an active member of the McKinney Chamber of Commerce, being Chairman of the Agricultural Committee.
He died of pneumonia March 24, 1924 at Rincon, New Mexico, where he had gone on a business trip.
The Kirkpatrick House, one of the historic homes still standing in McKinney, was built by Gen. Kirkpatrick in 1900, and has sheltered Kirkpatricks ever since. Alice Kirkpatrick, Mrs. Charlie Waide, raised her two children here, Martha Waide Schubert and son Elbert. Martha’s two sons, Jay Crum now with CBS Radio in New York and Tom Crum, a Waxahachie attorney, grew up in the ancestral home.
[The rank of General comes from the United Confederate Veterans. He was not a general in the Civil War.]