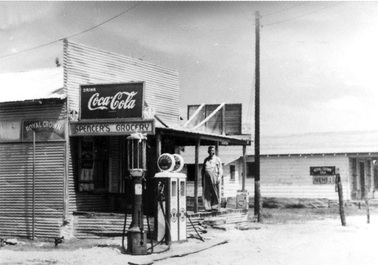 In 1844 William Warden and family left Missouri and started for Texas in a covered wagon.  After six weeks they came to a big spring south of now Melissa, Collin County.  Here they camped to hunt a permanent location.  Land was being given away, but Indians presented such a threat that Warden loaded his family in the wagon and went back to Bonham, where he acquired 640 acres two miles south of the place and built a log cabin.

He found the title to be imperfect, so he came back south and located at present Climax, Collin County, the first settler in the locality.  Soon after him came Lott Bruton and I. J. Rude, and a little later, D. Van Winkle, Abe Recer came about this time too. Abe built a toll bridge over Sister Grove creek, the first bridge over a stream between McKinney and Farmersville.  Recer later bought the Armp Mallow farm, two miles northeast of McKinney.

Climax reached its greatest population along about 1910, when A. M. Anglin and W. K. Long operated stores there.  It then contained about 100 people.  It later had three stores, but no gain in population.  The old Van Winkle Cemetery lies just south of the present store, in which lie many of the early pioneers of the section.

Mr. J. T. Spencer runs the only store there now.  He was born south of McKinney, and later ran stores at the old Holder's Store place and at Princeton.  Mr. Spencer married Miss May Gist, and they have three boys and one girl and five grandchildren.

While at Mr. Spencer's store this writer got a very impressive look at what erosion is doing to the land of the county.  One-half mile to the east of the store the top of Mr. W. A. Recer's house shows just over a hill. Mr. Spencer said that when no part of the house could be seen over the rise.  Now the whole roof down to the eaves is plainly visible.  The ridge has worn down at least fifteen feet in 20 years.

Climax has two churches, the Church of Christ and Methodist.  The former has no particular pastor; the pastor of the Methodist Church is the Rev. Bob Beasley.  School children ride the buses to Farmersville and Princeton, the old Climax school, just west of the store, stands empty and lonely looking.  Climax used to have one of the best schools in rural Collin County.  Mr. Spencer, with all his own children married and moved away, says the place is certainly lonesome without all the lively children it used to have.

Some of those living there, and near, follows: Mrs. C. C. Gray, W. R. Long, J. W. McCormick, A. M. Hall, Cecil Rickman; Rickman lived a long time on the old Heard Ranch, east of Princeton.  He is a disabled veteran of the Second World War; E. L. Wyatt, W. E. Willis, Loyd Rickman, Jese Rickman, all these farm.  J. B. Osborn, an old settler, lives near there, as does J. H. Davis and E. L. Tarrant.  Also living near are John Phillips, who farms and preaches; Lewis Carr, a dairyman, and Sam Shipman, another old settler. J. C. Fort, W. O. McMahan, Louie Wallace and Feland Montgomery all farm near Climax.

Climax can be reached over an all-weather road by turning off Highway 24 through Princeton, and taking Farm Road 1377, which runs through the Climax settlement.

The people in the Climax country are very much worked up on the oil question, oil having been found on the Watson farm near by. A meeting was held at Climax Thursday night to organize a stock company and sink a well. Wm. Wright and tow or three other parties in that vicinity have also discovered oil on their lands and will proceed at once to have it thoroughly tested by experts. The oil interest in this section is attracting considerable attention, as letters from different parties have been received from Beaumont, Corsicana and other points.

While in the Climax neighborhood we stopped at the pleasant home of W. W. Wright, a young and progressive farmer who is also interested in the oil lookout. We hope that their brightest anticipations in this direction may be fully realized and that old mother earth may yield up her rich treasure, which has been quietly sleeping beneath her bosom for past centuries.
At the splendid home of J. H. Waller, one of our old and appreciated subscribers, we stopped for dinner, ate some delicious apples grown in his orchard, bade him good bye reluctantly, for we found him a chip from the old Tennessee block, brim full of kindness and hospitality. We were off on our itinerancy at 2 o'clock in the interest of the Democrat-Gazette. it is indeed a pleasure to meet there people, who are honest, true and sincere. They have the ring of the right metal about them. Their lives and characters are as pure as the snow flakes that fall from a December sky. Collin county should be proud of such citizens and the State of Texas should love and honor them.....

W. K. Long has been measuring domestic and weighing sugar in this thrifty hamlet four years and by promptness and honesty, has built up a splendid trade. people appreciate a man who gives a square deal. Has been reading the Democrat-Gazette several years and sends it to his son, L. C. at Whitewright for which we thank him.

J. B. Osborne was a forlorn bachelor and was on a still hunt for a mate, when in 1901 Miss Esther Wright said the word that caused s smile to spread over his face. Five children bother Josh -the more the merrier-for his farm is in every way equal to the occasion and a big yam potato will satisfy the stomach of any youngster. He recently sustained a sprained ankle while jumping from a wagon that was being motored at high speed by two mules on a lark. After a "spiel" he tossed $1.75 our way with the request to send him the Democrat-Gazette and Dallas news one year. Thanks.

J. W. McCormick, after a four week's tussle with typhoid fever is convalescing.