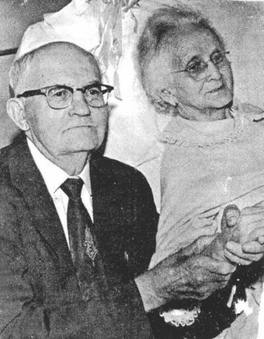 W. A. DUNGANS WED 66 YEARS
McKinney Daily Courier Gazette, July 1, 1965
Mr. and Mrs. W. A. Dungan of 302 Pearson Street, this city, are observing their 66th wedding anniversary, Friday, July 2. They were married in the Forest Grove community July 2, 1899, on the front porch at the home of the bride’s parents, Zachary Taylor and Zylthai Ellen Coffey.
The late Elder Johnny McKinney, uncle of the bride, performed the ceremony and attendants to the couple were Miss Zora Kerr, now Mrs. Zora Faulkner, and Elmer Spurgin, who presently resides in Haltom City.
Mrs. Dungan is a native of Collin County, born and reared in the Forest Grove community where she and her husband are still members of the Christian Church.
Mr. Dungan, the son of Moses Hill and Martha Ann Beverly Dungan, was born in Mississippi, but came to Collin County with his parents when he was four years old. They lived at Forest Grove for many years, where he engaged in farming, but for the past several years, they have lived in McKinney.
They are the parents of four living children, Eustace Dungan, Local Representative Bill Dungan, Clarence Dungan, Mrs. Ruth Atterbury, all of McKinney and Joe Dungan of Allen. They have 16 grandchildren and 26 great-grandchildren. One son, Arvel Dungan, died in 1963.
Mrs. Dungan also has four living sisters who are Mrs. Frank Orr, Mrs. Josie Martin, both of McKinney; Mrs. G. M. Martin of Forest Grove and Mrs. Geno Wilson of Plano.
Due to Mrs. Dungan’s illness, a formal celebration of the anniversary will not be held this year, but rather a quiet observance. However relatives and friends are invited to visit them at any time. Mrs. Dungan recently underwent surgery, but is slowly improving and hopes to be moved home from the hospital this weekend. Mr. Dungan suffered a stroke some time ago, but is recovering and is able to be up and about most of the time.
The Dungans have the congratulations of a multitude of friends upon the occasion of their 66th wedding anniversary.