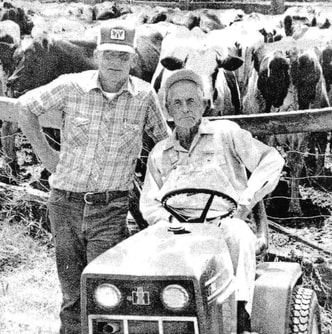 GIDNEY, ZENO
Newspaper.
DAIRY FARMER.... by C. Allin Means, staff writer.
Zeno Gidney, an 80-year-old dairy farmer from McKinney, has been milking cows for nearly half his life–only now he’s able to let his machine do most of the work for him.
“I milked there for a while by hand. I started out just selling cream–separated the milk and sold the cream,” Gidney said. “So then after I built the barn here, I built machines and tanks and everything.”
Gidney has been tending his dairy farm on FM 543 for 38 years. His son Norman, 56, joined the business in 1954 after spending time in the service.
“He says I’m older than he is,” Norman says of his father.
Zeno Gidney entered the dairy business in 1948 with fewer than a dozen cows.
“I had seven cows when I built that barn out there, and I bought 14 more,” Zeno said.
Norman bout 10 cows when he joined the business, and the two have never bought another cow since. The rest have been raised on the farm by the Gidneys.
“We’re going toward 700 head in all,” Norman said.
The dairy farm has grown steadily each year to become one of the largest milking operations in Collin County, Norman said.
“When we milk we normally average between 250 and 300 (cows per milking),” Zeno said.
The dairy farm produces about 9,000 pounds of milk per day. The milking barn handles eight cows at a time, each cow producing about 40 pounds of milk.
“We are the first stop every morning for the milk truck. We have to be done by 7 o’clock,” Norman said.
That means hired hands begin milking the cows at 1 a.m. The cows are back in the barn at 1 p.m. for the second milking.
“They (cows) pretty well know their time every day,” Norman said.
The Gidneys’ dairy farm was one of the first in the county to move the ‘bulk tank’ system, which means the milk is never touched by hand.
“The milk just goes right from the cow through a pipeline and over to the other milk room/can room,” Zeno explained. “And it just pours right into that bulk tank out there.”
Before the milk truck plugs into the tank to pump the milk into its own tank for hauling, it is refrigerated to 38 degrees and weighed on a gauger on the bulk tank.
“It’s all government tested to see that the tank is right.
“When we first started selling Grade A milk 38 years, ago, it went in 10-gallon cans,” Norman said.
....