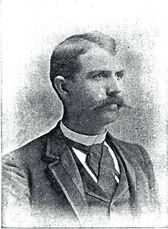 GOUGH, J. R.
Daily Courier-Gazette, September 16, 1913
SENATOR GOUGH BUYS FINE OLD 250-ACRE HOME OF GRUNDY HEDGECOXE [sic]  FOR $25000
One of the largest real estate deals closed up to this year was consummated Wednesday, when Senator J. R. Gough purchased the fine old 250-acre J. G. (Grundy) Hedgcoxe farm, from Mrs. Ellen Hedgcoxe, paying the sum of $25,000, or $100 an acre.
This farm is one of the choicest in the entire county. It is nine miles southwest of McKinney, and four miles due west of Allen. It is all extra good smooth land, being as free from imperfections as any body of land in size in the county. It all lies in one body having a splendid two-story, old-fashioned country home on it.
This ideal old home has a history, in that it has always belonged to the Hedgcoxe family. The late John Oliver Hedgcoxe, as honored pioneer citizen of Collin county, father of J. G. (Grundy) Hedgcoxe, bought the land some fifty or sixty years ago. One child was born to this family, Grundy Hedgcoxe, and only living heir. Hence, the old farm fell to Grundy from his parents, and it has been in the Hedgcoxe family for more than half a century.
Senator Gough will immediately have the old home repaired, and nicely repainted. He purchased it to keep. as few farms of the class are ever offered for sale in old Collin. We congratulate him upon the acquisition of such a splendid old piece of farm property.
The deal was got through by the McKinney Realty Co., with ? (Armp) Hill manager. We congratulate Mr. Hill on his splendid management in getting through such a large deal. Unless you want to hand on to or keep your property, better not list it with the McKinney Realty Co., Armp Hill, manager, because it will be sold if it is placed in their hands. ‘Nuff said.’

J. R. GOUGH DIED AT HOME IN M’KINNEY
Dallas Morning News, November 20, 1916
DECEASED WAS FOR NUMBER OF YEARS MEMBER OF TEXAS LEGISLATURE
Special to the News
McKinney, Texas, November 19– Former State Senator J. R. Gough of McKinney died at his home here at 8:49 o’clock tonight after a brief illness. Senator Gough was one of the best-known men in this section of the State, having served this district for a number of years as State Senator as a Representative from Collin County, He was prominent in State politics affairs for twenty years.
The deceased was a Knights Templar, Mason and past noble grand of the I. O. O. F. For the last few years he had been practicing law in McKinney.
He is survived by his wife and three children, Mrs. J. H. Hunter of McKinney, Andrew Gough of Galveston and Miss Madie Gough of McKinney.

GOUGH, J. R.
Newspaper.
No man in the whole county or state is better known, or more highly respected than former State Senator J. R. Gough, one of the directors of the new Mill. Mr. Gough is a director in the Collin County National Bank, and has many and varied interests in the city and county. He is a first-class business man, a fine lawyer, and has one of the best abstract businesses in all Texas. He served this county six years in the Lower House of the legislature, and this district four years in the Senate. Senator Gough is a high class, clean gentleman, and will made good in directorate of the new cotton mill.

GOUGH, JAMES R.
TEXAS STATE GOVERNMENT, by E. H. Loughery, A Volume of Biographical Sketches and Passing Comment, 1897
JAMES R. GOUGH, MCKINNEY, Senator from the Fifth Senatorial District, composed of the counties of Collin and Hunt, was born in Collin county, Texas, December 31, 1860.
His father, Alexander B. Gough, a prosperous farmer and leading citizen in North Texas in ante bellum days, joined the Confederate army at the beginning of the war between the states and, after having braved the perils of several hard fought fields in defense of a cause that he believed to be right, fell at the battle of Norwood Plantation, La., and was there laid to rest in a soldier’s grave.
His mother, Mrs. Elizabeth J. (Rowland) Gough, is living in McKinney.
He was reared upon a farm until twenty-one years of age; acquired a good English education; read law, and in 1887 secured admission to the bar, since which time he has been engaged in the practice of his profession at McKinney.
He was elected Justice of the Peace of Precinct No. 1, of Collin county in 1886 and re-elected to the position in 1888; was elected to the House of Representatives of the Twenty-second Legislature in 1890; was in 1892 and 1894 re-elected to the House of the Twenty-third and Twenty-fourth Legislatures; was in 1896 elected to the state Senate from the Fifth Senatorial district, and when his present term of service expires, will have been in legislative harness for ten consecutive years, during which time he has built up a record no part of which but fully sustains the high reputation he enjoys as an able lawyer, man of sound and true ability, and spokesman of, and law-maker for the people....
Senator Gough is a member of the Masonic, IOOF and Knights of Pythias fraternities.
He was united in marriage at McKinney, February 6, 1887, to Miss Mary Andrews, daughter of Judge w. H. Andrews, of that place, and has three children: Anna Leta, Andrew Bailey, and Mary Lee Gough....