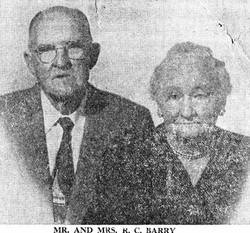 Mr. and Mrs. R. C. of Route 2, McKinney will celebrate their 60th anniversary with open house Sunday, October 29, at the home of their daughter, Mrs. Fred Petway in the Winningkoff Community. All of their friends are invited to call between 2 and 4 o’clock Sunday afternoon.

Mr. and Mrs. Barry were married in Lancaster, Texas, October 31, 1895, moving to Collin County 42 years ago, since which time they have resided in the Forest Grove Community.

Mrs. Barry was Miss Minnie Nix before her marriage and is a native of Lancaster. Mr. Barry was born in Hartsville, Tenn.

The couple will be assisted by their three children, Mrs. Fred Lester of Dallas; Mrs. Fred Petway, R. F. D., McKinney and Earl Barry of Forest Grove, in entertaining Sunday. Their five grand-children and sever great-grandchildren will also assist in receiving the guests.

Mr. and Mrs. Barry are a highly respected couple of their home community and have the congratulations and best wishes of a host of friends upon their approaching anniversary.