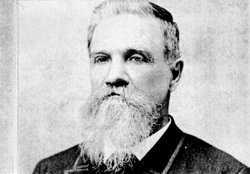 Capt. Bush was born in Clark county, Kentucky, May 27, 1833, and was therefore seventy-four years and sixteen days of age. When quite a young man he married Miss Bettie Raney of that state and in 1856 they moved to Texas, settling first in the western part of Denton county but soon moving to Collin county four miles southwest of Allen, which has ever since remained their home. Soon after the outbreak of the civil war he enlisted in the confederate army and served as captain of company G. in Alexander's regiment, Polnigac's [Polignac] brigade.

He served with marked distinction on the battlefield and was several times wounded in action.

In 1869 Capt. Bush was elected sheriff and tax collector of Collin, the two offices then being in one, and was re-elected in 1871. This was during the turbulent days of reconstruction and he made one of the best and most efficient officers in the history of the county, contributing much to the bringing about of peace and order in the county, ever upholding the supremacy of the law.

He served with ability as county commissioner before the war.

He is survived by his wife and two sons, James N. and Sterling Price Bush of Allen. Mrs. G. E. Carpenter, deceased, was his daughter.

Capt Bush was a faithful member of the Christian church, an active and zealous democrat and true and upright citizen whose death is deeply deplored by all. He had been in ill health for two years, suffering from Bright's disease and paralysis.

Funeral services will be conducted at Bethany at 11 o'clock this morning by his lifelong friend, Eld. John McKinney, and the remains will be brought here and laid to rest in Pecan Grove cemetery, at 4 p.m. Judge J. M. Pearson, a fellow ex-Confederate and a devoted friend for many years, will deliver an address at the grave on behalf of the ex-Confederates. We join with many friends in extending condolence to the sorrowing relatives.