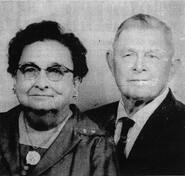 ROBERT FURRS TO BE HONORED DECEMBER 18
Newspaper.
Mr. and Mrs. Robert Furr of Route 1, McKinney, will be honored by their children and grandchildren at a reception December 18 from 2 to 4 o’clock. The occasion is in observance of their Golden Wedding anniversary. They were married Dec. 21, 1916 in Walnut Grove Presbyterian by Rev. Stanifer.
Mrs. Furr is the former Norma Hickey, daughter of the late Mr. and Mrs. J. B. Hickey, of Foote. She was born and reared on a farm near her present home. Mr. Furr is a native of Albermarle, N. Carolina, coming to Collin County as a small boy and has since resided in and around McKinney. Mr. and Mrs. Furr are active members of the Walnut Grove Presbyterian church.
Their children and grandchildren are Mr. and Mrs. Winston Furr and son, Gary, Tyler; Dr. and Mrs. Frank Cashon Jr. and two daughters, Cindy and Lisa Kay of Kilgore. They lost two sons, Robert Francis, at the age of two and Jim Hickey Furr who was killed in “World War II.

All friends and relatives of the Furrs are invited to attend their anniversary party.