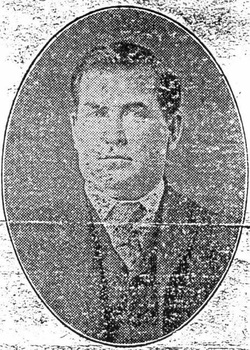 Funeral Services Will Be Held at 4 P.M. Tomorrow

Jesse Atkinson is dead. The news of his passing which was not unexpected and which occurred at 8:52 a.m. Thursday, Aug. 9, at his home on West Tucker street, rapidly spread over the city and county and caused universal sorrow. Many messages of sympathy came to the bereaved wife, son and two sisters on the premature death of their husband, father and brother.

Funeral services will be held Friday afternoon at 4 o’clock at the First Baptist church by Rev. J. L . Truett of Whitewright, assisted by Rev. J. Ben Snider, McKinney lodges of Mason, of which Mr. Atkinson was a member, will have charge of the funeral services at the grave.

Mr. Atkinson is survived by his wife and one son Chandler Atkinson, who is not in his twenty-first year, two sisters, Mrs. Walter D. Howell of this city and Mrs. T. M. Beverly of Crowell, Texas. Mrs. Beverly arrived in McKinney Wednesday, having been notified previously of Mr. Aktinson’s serious condition. He leaves one nephew, Tom Beverly Jr. of Crowell, and many other relatives in McKinney and other points in this state and in Oklahoma. Three aunts also survive. They are Mrs. D. C. Hill and Mrs. L. L. Dulaney of McKinney and Mrs. Henry Barnes of Sulphur, Oklahoma. He is also a nephew of [?] Field. Mrs. Barnes was notified of his death Thursday morning and is expected to be here for the funeral.

Jesse Atkinson was born near Rowlett church on January 7, 1872. He lived there with his parents, Mr. and Mrs. Andrew Atkinson until eleven years of age, when they removed to McKinney and for the last thirty-nine years resided in this city. His father, also a native of Collin county, died about fifteen years ago, and was one of the best known citizens of this county, loved and respected by all who knew him. His mother, who before her marriage in 1869, was Miss Mildred Field, died about twenty years ago.

In early manhood, Mr. Atkinson was engaged in the livery business in this city. In that he was successful. For a number of years however, he had not been actively engaged in business. He had been in ill health for about two years, and for several months had been confined to his bed. A few days ago his condition became critical and it was evident that the end was soon to come. During this illness every thing that medical science could do was done and everything that the loving hands of relatives and friends could do to relieve his suffering was also done, but to no avail, because the Merciful God of a great universe deemed it best that he pass from this earth into the world beyond.

Feb. 9, 1889, Mr. Atkinson became a member of Engine & Hose Co. of the McKinney Volunteer fire department. He was exempted from active service in 1896 after serving the customary seven years.

Mr. Atkinson had been a member of the First Baptist church for more than twenty-five years and until his health gave way he was active in this work. For many years he was treasurer of the church here. He was a member of St. John’s Masonic Lodge, of the McKinney Knight Templars, the Odd Fellows, the Knights of Pythias and the Woodmen of the World. For many years he was also active in the work of these organizations and always did his part in building up these great orders.

Mr. Atkinson was a man loved by all who knew him. He numbered his friends by his acquaintances. He rejoiced in the successes of his friends. He brooded with them in their failures. His heart was filled with love for his fellow man and whenever the occasion presented, he scattered sunshine in the paths he traveled. He was ever ready to lend a helping hand to those who needed this aid.

The deceased owned considerable farm land and livestock interests to which he devoted his time and attention in managing for a number of years. He was successful in business and enjoyed an enviable reputation as being both successful and dependable in all his obligations. He was held in the highest esteem by all his business associates. He was charitable and sympathetic by nature and his helping hand and means were often liberally extended in assistance to those needing them.

The honorary pallbearers will be his numerous friends throughout McKinney and Collin county.