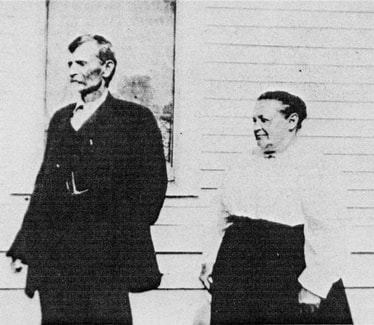 J. R. HERNDON OBSERVES HIS 93RD BIRTHDAY
Democrat-Gazette, December 26, 1940
J. R. (Uncle Jim) Herndon observed his ninety-third birthday Sunday. A bounteous dinner was served him in his home on Graves Street in charge of his daughter, Mrs. G. B. Fritts, who lives with him, assisted by his married daughters. The dinner was one of those good old-time dinners, where there is plenty for all. The children brought well-filled baskets, with turkey and all that goes with it. Quite a number of nice gifts were received by Uncle Jim from his children and friends throughout the city and county. Beautiful flowers were sent in and helped to brighten the occasion for this dear old pioneer, who was born in Collin County and has spent all his life right here in and near McKinney.
Uncle Jim is the son of the late George and Cynthia Herndon, who were among our earliest settlers. He married Miss Susan Bush, daughter of Oliver E. Bush and wife, deceased. He is a member of First Baptist Church and never misses a service unless prevented by illness or the weather too bad. He can been seen walking from his home a mile in West McKinney and down Louisiana Street, any Sunday when the weather is pleasant. He prefers to walk. He has been a member of St. John’s Masonic Lodge here since 1907 and is possibly the oldest member of that lodge here, but not the oldest in point of membership. His health continues remarkably good for his age. His hearing has begun to fail, but he enjoys coming down town to mingle with his friends and also where he rarely fails to meet on of his children or grandchildren, for he has nine children and 49 grandchildren, besides great grandchildren, nieces and nephews.
Mr. Herndon is always cheerful. Always friendly. People love to greet him. He has been one of our most loyal friends for over 50 years and only a few days ago sent in his renewal. His father before him was a subscriber to our paper—in fact we sure have lots of Herndons and their kin on our list. Bless Uncle Jim and all his folks, and may he observe many more happy birthdays, and we hope we may be here to tell about it. The weather has been so bad for several weeks that it may be there were not so many at the dinner as would have been had it been pretty weather. But we note the following:
Dr. and Mrs. W. F. Wolford, Mr. and Mrs. John Moore, Mrs. Clarence Allen, Mrs. A. M. Hill, McKinney; Mr. and Mrs. W. R. Moore, Hale Center; Mrs. Jim Mathews and son, Ralph, Hale Center; Mr. and Mrs. Huie P. Hartley, Baytown; Mr. and Mrs. H. H. Stephens and Mrs. Bernice Stephens, Dallas; Mrs. Jerry R. Herndon, and children, Elizabeth, Pattie Sue and Jerry R., Jr., McKinney; Mr. and Mrs. Jas. Herndon and daughter, Gladys, McKinney; Mr. and Mrs. Ed Herndon, McKinney; Mr. and Mrs. Jerry Harold Herndon, Dallas; and Mrs. D. B. Fritts, who lives with her father.
Uncle Jim enjoyed the day very much, despite the rain which had been falling all day. Quite a number of friends and neighbors called to express good wishes.

JAMES R. HERNDON
From Judge Brown’s History of Collin County
J. R. Herndon was born December 15, 1847 at Old Buckner, his parents having come there to settle in 1847. In his 89th year he said he was the last person alive to have lived at Collin County’s first County seat. His early childhood centered around the log cabin where his grandparents lived.
He was proud of the fact that he spent his entire life here and was often heard saying that a man’s pride in those days was his ox team who helped him do the work that fell to the pioneer man.
Horse racing, he said, was a favorite sport among the boys and men and it was not unusual for a man to bet his own horse in a race against another. They would select a place on the prairie and mark off a distance of one quarter to one half mile. Once a bet was made the owner literally slept with the horse in the barn for fear some trick be pulled on his horse. The unscrupulous fellow sometimes threaded a needle with a hair from the tail of the horse and ran it through the tendon of one leg. The ends were carefully clipped off so no one could detect the trick, but it did cut down on the speed of the racing horse.
James’ double cousin, George Henry Herndon, was the first white boy born in the county (we have no record of the Indians who were here.) A cousin of James, Cynthia Ann Dunn, was the first white girl born in Collin County.
He liked to tell about milking the cows as a boy. There were no pails as we know them so the “piggin” was used instead. A piggin was a small wooden vessel made with one stave a little higher than the other, used to held it by. Milking was a task that fell to the women or little boys.

JAMES R. HERNDON
Biography.
James R. Herndon, son of George and Cynthia McGarrah Herndon was born on Dec. 15, 1847 at the home of his grandparents, John & Polly McGarrah at Buckner. He lived with his parents in the Upper Rowlette community until he married Susan Ellis Bush, October 7, 1869. They lived for a short while in Cooke Co. and grazed their sheep on open pasture land. They moved about one half mile east of the old homeplace, and lived there most of the time until the early 1900s.
They were the parents of twelve children: Eula (Mrs. Will Lucas), May E. (Mrs. W. R. Moore) Sallie B. (Mrs. H. H. Stephens) C. Harriett (Mrs. D. B. Fritts), Dora F. (Mrs. Ed F. Sharpe), Annie (died young), Bush, Ed, Glenn, Jerry, James and Henry (died young). James R. Herndon moved to McKinney in the early 1900s and lived there until his death March 27, 1942 at age 95.
Susan E. Herndon died Dec. 26, 1918. Both are buried in Rowlette Creek Cemetery.