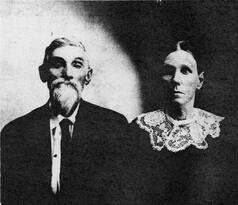 GEORGE W. GALLUP
History of Foard County, Texas, p 173
George Washington Gallup was born in 1840 and died in 1922. His wife Ella Huffman was born in 1853 and died in 1912. Their children were: Rebecca Goodwin, born in 1878, died in 1925: Lucy Fish, born in 1880, died in 1952; Amanda Wilson, born in 1883, died 1945; George Gallup, born in 1885, died in 1938; Laura Keller, born in 1886, died in 1952; Willie Lou Carr, born in 1889, died in 1918; and Johnnie Matthews, born in 1892, died in 1963.
The family moved from Collin County in 1898. They settled on the Abston place two miles east of Crowell.
The girls were housewives and moved to different places in Texas and Oklahoma except Mrs. Fish who lived in the Vivian community after her marriage. She taught in Hackberry school in the western part of the county. George was a ginner holding jobs in Foard and Cottle Counties.
The family rented farmland in the vicinity of Crowell. All the girls were industrious, spending much time helping with the farm work.
George Washington Gallup was born in Kentucky in 1840. He settled in Collin County in 1855. Three or four years later, he and a group of young men went to Pike’s Peak in Colorado, where gold had recently been discovered. He was back in Texas in time to see the first Confederate soldiers being enlisted. He was among the first to enlist. He became a member of Company “C”, Sixth Texas Calvary, Ross Brigade under Capt. Lafayette Smith and Col. Warren Stone. He was in good health and never suffered any wounds while participating in all the battles of this noted and gallant brigade. This incident was not recorded, but he told his grandson, Herbert Fish, that he was a war prisoner for six month.
His first wife lived only a few years. Their daughter, Mrs. W. T. Rasor, was a pioneer resident of Foard County. Mrs. Rasor was mother of “Miss Lena”, teacher in Crowell Public School for many years.
His second wife was Ella Huffman, born I 1853. She was the daughter of Dr. John S. Huffman, a surgeon in the Confederate army. Her sister Ruth Huffman Baines was grand mother of ex-president Lyndon B. Johnson.
They moved to Foard County in 1898 from Collin County. None of their children were natives of Foard County, although they lived here many years. Mrs. Gallup die in 1912 and Mr. Gallup died in 1922.