Personal Mention of People You Know by Our Field Man.

Calling at the home of W. H. R. Mathews in the Branch community last Monday afternoon he was absent but Mrs. Mathews was nursing a pair of bouncing six months old twin boys the stork was kind enough to leave them a few months ago.

The recent cyclone that passed through Princeton killing two people, wounding others and destroying property, missed the Mathews residence about two hundred yards, but the family took refuge in the storm cellar. For a number of years on the Democrat Gazette list they can not do without it now. We hope Perkins and Wilson (the twin boys) will grow into real boosters for their family paper.

E. A. Robinson owns a good little farm of fifty acres and his crop of corn, oats, cotton and elm stumps cannot be excelled anywhere. his corn is the best in the community and that is saying something.

Prof. J. W. Akin for nine years a pedagogue and who for four years has taught his home school at Clear Lake, renews for the Democrat-Gazette. John is an orator and debater of the first water and in the discussion with Miss Hester Hillis in December, 1906, carried off first honors. She too, was a teacher, saw the point and is now wife and proud mother of a girl and boy, the latter a stalwart republican. Prof. Akin owns a model farm one mile west of town and boasts of being a devoted husband, indulgent father, successful school teacher, model farmer and a republican politician for the glory there is in politics. 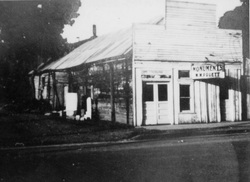