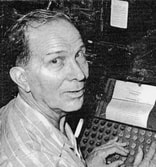 WALTER HOLLAND RETIRES AFTER 43 YEARS ON JOB
Newspaper, 1966, by Frances Stogdill
Forty-three years continuous service with one business firm bespeaks efficiency, and dependability for any employee.
Walter H. Holland of McKinney holds such a record, having just recently retired after that many years association with the McKinney Daily Courier-Gazette and Weekly Democrat-Gazette.
He received a certificate of retirement from Bob Mathis, general manager. Holland’s retirement is due to ill health.
A native of Collin County, he is the son of the late Mr. and Mrs. A. H. Holland of Princeton and McKinney, He was reared in this county, attended public school in Princeton and later McKinney where he graduated from the old Boyd High School in 1923. During his high school years Holland was a member of the football team.
In May 1923, Holland became employed as linotype operator for these papers. During the years he continued in that capacity, serving for a number of years as shop foreman. One of his co-workers stated “there isn’t anything in the mechanical department that Walter can’t handle.”
Very Dependable.
He was not only efficient, but most dependable, and was on the job bright and early every morning. He was never absent due to illness until about two years ago when he was stricken ill and spent a few weeks in the hospital. He had recovered and was back on the job until a heart attack again hospitalized him, and it became necessary to retire from active duty....
Walter Holland married Miss Virginia Goode in young manhood and they are the parents of two children: Walter Dillon Holland of Navato, Calif., who is supervisor of Physical Measurement for Tracer Laboratory, and Mrs. Ed Lee of Reno, Nev., teacher in the public school system there. They have two grandchildren, Steven Wayne and Sharon Joyce Holland of Navata, Calif.
He is a member of the First Baptist Church, Quarterback Club and “M” Association, whose membership is made up of former letterman of McKinney High School. Holland played guard and tackle the two years he was a gridster, coached by Nubbins Cobb, well-known North Texas State University mentor for several years, after leaving McKinney....