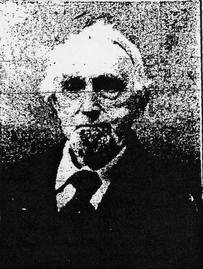 FRANCIS EMERSON
Biography.
Francis Emerson was born in Ireland on February 23, 1815 and at age thirteen came to America. In New York he learned the trade of coppersmith, then worked in New Orleans repairing steamboats. He went back to Ireland and married Elizabeth Thompson, and returned to settle in Rockford, Illinois. In 1838 he moved to Wisconsin where he was in the hardware business and also made buggies and wagons. During his stay there of 16 years he served several terms as County Clerk.
He made several horseback trips to Texas, the first in 1854 and finally moved his family to Dallas where he was in the hardware business. During the Civil War he made several horseback trips to Old Mexico. At the close of the war he moved to McKinney and entered the mercantile business and in all these ventures he was highly successful.
Francis started the first bank in McKinney in 1869 and it was a highly successful business. The little wooden bank stood among all the other little wooden stores on the west side of the square. His bank became the First National Bank and he served as the president. Besides banking, he owned large tracts of land, some of Collin County most beautiful ranches west of present McKinney. Incidently, some of his loveliest land is part of the multi-million dollar development venture announced in 1986.
The Emersons had seven children: T. H., Mrs. H. Smith, T. T., Mrs. Mary Welch, Mrs. C. N. Abbott, and Mrs. J. L. Lovejoy. Howell E. Smith was a grandson and Francis Emerson, registrar at the Texas Women’s University at Denton is a great-grandson. Fred Emerson married Laura O’Brien, descendent of the pioneer family who settled northwest of McKinney in 1857 (near old Ft. Buckner) first county seat of Collin County. The little abandoned Buckner Cemetery is now called the O’Brien Cemetery.

EMERSON, FRANCIS
McKinney Daily Courier-Gazette, July 18, 1905
THE END OF A LONG LIFE
Francis Emerson Answered Deaths Summons Last Evening
WAS A PIONEER CITIZEN
Came to McKinney About 1865
An Eventful and Useful Career
Francis Emerson is dead. The end came yesterday afternoon at 5:45 o’clock. Surrounded by his children and grandchildren, who had ministered to him very attentively and tenderly during his last illness of several weeks duration, he breathed his last and will be known no more among the walks of men. Few have so long resided in this locality and been so generally and favorably known by the people. His familiar figure and face will be missed. Though small of statue he was a man of strong, physical constitution and bore the weight of his ninety years with remarkable strength, possessing a bright memory and retaining a lively interest in all of the affairs of his business. Up until a few months ago he was able to walk the short distance from his home to the square, and then for some time he was driven almost daily to town by his faithful old colored servant, “Uncle Dick.”
Mr. Emerson was a native of Ireland being born at Lurgan, County of Armagh, February 23, 1815. When only thirteen years of age he came to America and remained for five years. At New York he worked for the Threadgill Cracker company and afterward learned the coppersmith trade, which, when on going to New Orleans, he followed in repairing and fitting out steamboats. While there he was stricken with yellow fever and came near dying with the hundreds of others who succumbed to the terrible disease. From New Orleans he returned to Ireland in 1833, and wooed and won for his bride Miss Elizabeth Thompson, a native of Glasgow, Scotland. The were married in 1836, and sailed immediately for America. On landing in the United States they went first to Chicago, and from there to Rockford, Illinois, where they lived for two years, and in 1838 moved to Monroe, Green County, Wisconsin, where Mr. Emerson established a hardware business, and also engaged in manufacturing wagons and buggies, his firm being known as the Monroe Manufacturing company. During their sixteen years residence at Monroe Mr. Emerson was elected county clerk of Green county on the Democratic ticket, and held the office as long as he would accept it, being nominated and elected the first time, and renominated and re-elected each succeeding time without solicitation on his part.
Mr. Emerson made his first trip from Wisconsin to Texas in 1854, on horseback, and afterwards made several trips back and forth the same way. ON moving his family to Texas he located in Dallas and entered the hardware business. While living there he made a horseback trip to Mexico during the war. AT the close of the war he moved to McKinney and entered the general merchandise business, which he conducted for a long while very successfully, as he did all of his business undertakings. He established the first bank in McKinney, the private banking firm of F. Emerson & Co., doing business until 1873 when it was succeeded by the First National bank, of which Mr. Emerson was president as long as he lived.
Mr. Emerson had two brothers who came to the United States also. One of them died many years ago, the other, Thomas Emerson, died abut twelve years ago at Monroe, Wisconsin, and has three children living there now, Frank, Charlie and Miss Margaret Emerson.
Mr. Emerson’s wife died June 1, 1879, and was buried in Pecan Grove cemetery. From their union were born seven children, namely: T. H. Emerson, deceased; Mr. S. H. Smith and T. T. Emerson of McKinney; Frank Emerson, deceased; Mrs. Mary B. Welch, deceased; Mrs. C. N. Abbott, Cincinnati, Ohio; and Mrs. J. L. Lovejoy, McKinney. There are nineteen grandchildren and twenty great grandchildren living.
Mr. Emerson was a member of the Presbyterian church, and in all the relations of life was a kind, thoughtful father, husband, friend and neighbor. He had scores of friends and his passing away will be universally regretted.
The funeral will take place tomorrow (Wednesday) morning, services to be held at the residence on North Tennessee street, at 9 o’clock by Rev. S. L. Rieves, assisted by Rev. W. P. Cloyd.