N, O Houses                                                               McKinney Area Houses
Newsome - King House - McKinney
Located at 401 West Louisiana Street in McKinney. This house is on the National Register of Historic Places. The two story residence at 401 West Louisiana Street, corner of Benge, Street, has been a showplace in the North Texas area since the turn of the century. Known as the Newsome Homeplace, and later the A. C. King residence, the property has changed hands on several occasion, but still retains beauty in its antiquity.
On September 22, 1888, J. W. and Ann Throckmorton sold the entire block on which the house stands to W. B. Newsome. It was a small frame building at the time, and due to a next door fire which caused considerable damage to the west side of the house, a remodeling program was begun. This included enlarging the reception hall with large ceiling-high fireplace added, moving of the stairs, and many other improvements. At the time it was remodeled the red brick was added, and an Englishman came here to do the interior decorating. The home was so beautiful that people from all over North Texas came to McKinney to see it. It was also the scene of elaborate receptions, weddings and social events through the years. The original furniture in the dining room remains in the house as well as carpets in the front parlor and reception hall.
After the Newsomes sold the house to Augustus (Gus) C. King, whose family occupied it for 52 years, it was sold in 1966 to James Aubrey Griffin of Dallas. In 1972, Griffin resold the property to Mr. and Mrs. Billy C. Stephens of Dallas. 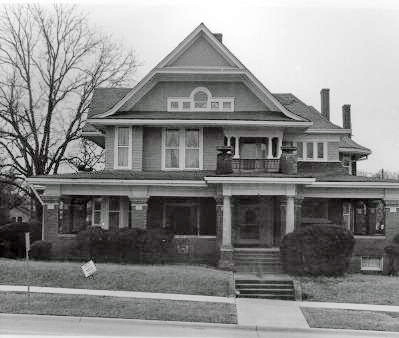