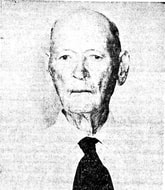 To Mark 100th Birthday
Examiner, October 25, 1962
James M. (Matt) Miller
James M. (Matt) Miller will celebrate his hundredth birthday Sunday, October 28th. He makes his home with Mr. and Mrs. Lawrence Miller, one mile south of Melissa. No special invitations have been sent, but all his friends are cordially invited to visit Uncle Matt during the afternoon.
Born in 1862 in a log cabin one and a half miles east of Anna, he was one of eight children of Matthias and Anne Miller. He has lived most of his life in Collin County near Melissa. In 1886, he married Jimmie Lee Callahan of Weston, and they had two sons and two daughters: Lawrence Miller, Melissa; Alvin Miller, Sherman; Mrs. Aurelia Johnson, Celina, and Mrs. Jessie Lewis, Fort Worth. His wife passed away June 10, 1952, and for the past ten years he has lived with his son, Lawrence. Uncle Matt has eighteen grandchildren, fifteen great-grandchildren, and two great-great-grandchildren.
Mr. Miller is still very active. He hoes corn every year and cuts weeds and grass from spring until frost. He wears glasses only when he reads the newspapers and magazines daily, and he writes his own letters and checks. Until this year he has spent at least one day at the State Fair of Texas.