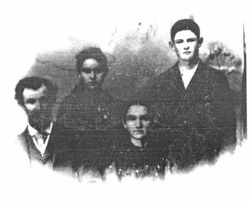 A man who had a broad acquaintance and many friends around Wylie was Moses Andrews. He married Sarah Elizabeth Edens, daughter of E. E. Edens of Judsonia, Arkansas.

In 1885, Mr. Andrews and his family moved to Wylie along with two of Mrs. Andrews sisters, Lelia and Susie, and three brothers, Bob, George, and Bill Edens. Mrs. Andrews’ father also came with the move to Texas.

Mr. Andrews was born Dec. 8, 1843. He was a farmer owning a farm north of Wylie and was also active in real estate around Wylie.

Ben, the first, was married to Ella Holland of Judsonia, Arkansas. He came to Texas with his parents and after completing his education, taught school at the Cotton Belt School for several years before returning to Judsonia. He and his family later moved to Little Rock, Ark. Ben and Ella reared three children: Charley, John, and Frances. They were Baptist people.

In addition to their own family, Mr. and Mrs. Andrews also reared two other children. Mrs. Andrews sister, Lelia, was taken into the family after Mother Edens passed away in 1875. Lelia was born 1873 and married Jim Russell a native of Wylie.

The other was Mrs. Andrews’ nephew, Jack Saltzman. He came to the family after the death of his mother, Susie, in Denton County when Jack was but an infant.

Mr. Andrews was a lively and restless business man, prompt in keeping his promises and engagements. His purse, his heart and hand were always open to his friends and to those in trouble. Oweing to his failing health, he left the farm in later years and bought a home in Wylie. After a long illness, he passed away on July 11, 1918. He was a lifelong Baptist.

Mrs. Andrews was born in 1851 and was reared by a Baptist family with ten children. She passed away on April 1, 1939, on the same day her sister Lelia Russell died. A double funeral was conducted at the Methodist church.