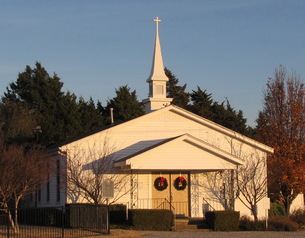 ...The founding of this old Forest Grove Christian Church dates back to 1847 when William Snider and his wife, Mary Syndusky, opened their small home as a meeting place for Sabbath worship services. They had been part of the Reformation Movement back in Illinois.... As the first group was small – with the Snider family, the George Fitzhugh family and that of Gabe Fitzhugh, and any other who wished to come....

While we may safely say that William Snider and his wife founded the Forest Grove Christian Church, John M. McKinney, Jr. may be called its “guiding light.” ...

On July 23, 1858, a reaffirmation of faith was made by the following members: Elder J. B. Wilmeth as the organizational minister, the William Sniders, John Lovelady and wife, James Anderson and wife, and Mr. and Mrs. John M. McKinney, Jr.

In the history A. H. Snider wrote of Forest Grove Christian Church, he stated that John M. McKinney, Jr. and Elder J. B. Faulkner were the first ministers of the Church....

According to the book Men of the Peters Colony by Seymour Conner, “William Snider came to Collin County prior to 1850 and was issued a Certificate, No. 821, for a 640 acre headright.” His is listed as “a 43 year old family man from Kentucky.”

Another of the first members was Sarah Bellew who came with a family member – John Abston, the only American Revolutionary War soldier who is buried in Collin County....

Sarah Wetsel was another charter member of the church; she was the wife of Peter Wetsel.... Their home near Allen, Texas, was an early stage stop which still stood until last year when it was burned by the Allen Fire Department to make way for developing the beautiful. Peter Wetsel was issued Certificate No. 992 for 640 acres of land from the Peters Colony....

James Wetsel was also a charter member of the church. Coming as a single man to the Peters Colony, he claimed a headright of 320 acres of land.

Aaron Snider, a pillar of the church, served in Fitzhugh’s Company in the Confederacy – Johnson’s Brigade. Before the War, he operated a mill and cotton gin in Forest Grove that were powered by two large steers.

The Forest Grove Christian Church stands at the west end of the ancient Fitzhugh Cemetery where many of the Earliest pioneers of Collin County are buried. The first burial there was of the twin daughters of Robert and Katherine Fitzhugh who died in 1852. Here, too, lies Eliza, the wife of the Church’s founder John M. McKinney, Jr.; She died at age 23 soon after the first land was purchased for the church in 1857. Near the east end of the Cemetery lies Gabriel Fitzhugh who donated the land for a cemetery with the request that he be buried under the big trees near the gate....

THIS CHURCH TRACES ITS ORIGIN TO
INFORMAL PRAYER MEETINGS HELD
IN 1847 AT THE HOME OF WILLIAM
AND MARY (SYNDUSKY) SNIDER. AMERI-
CAN REVOLUTIONARY WAR VETERANS
AND ORIGINAL SETTLERS OF THE
PETERS COLONY ARE COUNTED AMONG
THE EARLY MEMBERS OF THE CON-
GREGATION. JOHN M. McKINNEY, JR. AND
J. BEN FAULKNER SERVED AS THE
FIRST MINISTERS OF THE CHURCH. ALL
CHURCH STRUCTURES HAVE OCCUPIED
THIS SITE ADJOINING HISTORIC FITZ-
HUGH CEMETERY WHICH HAS GRAVES
DATING TO 1852. ALTHOUGH SERVICES
ENDED IN 1984 CHURCH BUILDINGS
REMAINED THE SITE OF VARIOUS
COMMUNITY PROGRAMS AND EVENTS.
Texas Historical marker, 1992.